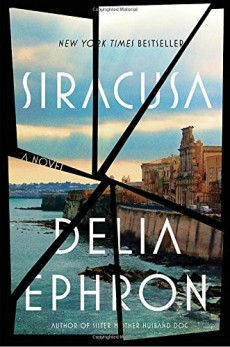 Two American couples go on holiday together. Their friendship begins to disintegrate almost immediately and death is the result.

Lizzie and Michael, a couple from America, are visiting Italy with their friends Finn and Taylor and their daughter Snow. The book never spells this out but after a few mystifying chapters these relationships become apparent. Each chapter is written from the viewpoint of one person, telling what happens as he or she perceives it; sometimes telling or reflecting on what happened in the past, sometimes describing the present. It is quite difficult for much of the first part of the book to recognise a coherent sequence of events.

This rather introspective way of telling the story leaves little room for much descriptive prose. Any description tends to be the emotional response of the viewer to the landscape. The daughter, Snow, who is often at the centre of any action, is very peculiar and her actions seem to dominate everyone’s vision. The Trevi Fountain, where there is an incident involving Snow, is just referred to as “the magnificent Baroque fountain, the grandest in Rome”, and reference is made to the film The Dolce Vita. Such a superficial vision of the surroundings reflects the superficiality of the characters - so in that sense the book could be called well-written, but whether it is worth reading is another question entirely.

The viewpoint of the individual in each chapter certainly sheds light on each of the characters so that some depth to these superficial main characters is achieved. It is debateable, however, whether or not this approach is helpful in telling the complete story. Indeed there is not much of a story to tell and perhaps the crime fiction label may not be the most appropriate.

It is unusual for a book to promote such a negative view of Italy. The holiday couples seem to see Siracusa as old, run-down, empty and frightening. They certainly do not develop a romantic view of the country, and make almost no mention even of the food, other than the pesto being made of pistachio and parsley. The only other mention – “she scraped a bit of apricot and pine-nuts off a sardine before tasting it” – seems to sum up their attitude. The whole atmosphere is that of these Americans being totally out of their depth in Europe which the author conveys very well.

The ending is rather obtuse and difficult to comprehend. One of the characters surmises that “games played on other people became a game played on me.” For readers who like game-playing, this could be an interesting book, but otherwise it is a disappointing and shallow, if complicated and well-written, read.