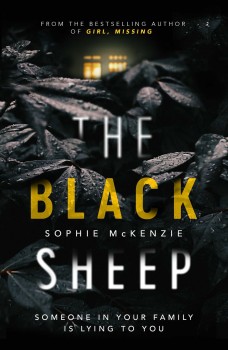 Francesca believes her husband’s death was a senseless attack, but then a stranger’s words shakes her belief to the core.

Francesca was widowed a year ago, but her grief, and that of her children is still raw. Despite their support, Caspian’s memorial service is hard, reminding her that she is the odd one out in her slightly dysfunctional family; the only one who doesn’t wear her Catholicism like a garish mantle; the only one who didn’t disapprove of her gynaecologist husband’s stance on abortion.

Totally inappropriately, an acquaintance hits on her after the service – Simon Pinner, a man far too comfortable in his skin. If that isn’t enough to rock her already fragile world, a stranger, Harry Dunbar, whispers in Francesca’s ear, and all sense of solid ground disappears.  He tells the young widow that her husband’s murder was deliberate, carried out by a member of an anti-abortion group. And that someone is close to home. So close to home, that Francesca is no longer sure who she can trust, if anyone.

Even though she is attracted to Harry, she doesn’t want to believe his accusations. And she believes him even less when she catches him in a lie. But then another gynaecologist turns up dead, and a dangerous game of cat and mouse begins.

I love dysfunctional families. Combine them with murder and it is a recipe for a gourmet meal. I was hungry to read Sophie McKenzie’s novel, and dived in. Unfortunately, despite some excellent ingredients, there is a sense of the meal being overcooked from the opening chapter.

The first part of the book is written from Francesca’s first-person point of view, in the past tense. And while I felt an early sympathy for her situation as a young widow with two children, her introspections and erratic behaviour created an image of someone inconsistent, superficial and verging on stupid. I am sure that after a year without ‘male company’, most young women might be feeling lonely. But to have the protagonist toying with the idea of dates at her husband’s memorial service did little to help me connect with her. Neither did I find endearing the ease with which she dumped her children off with baby-sitters, friends and anyone who happened to stand still long enough for her to ask. Small wonder her children were acting up Worst of all, in her quest to find out the truth, she takes unbelievable risks for a mother who lost her husband in a knife attack.

Further into the book the author writes from other points of view, including Harry and Lucy, Francesca’s sister. Harry came across as nothing short of wet. As much as I don’t like stereotypes, his weak personality was so far removed from that which I believe necessary for his profession, that I wondered how he earned enough to pay the mortgage. As for Francesca’s family, their eccentricities were so overplayed that rather than bringing their characters to life, they became two-dimensional caricatures, and between that and the religious aspect of the plot, it took about two minutes to work out the criminal.

It was soon clear that Catholicism played a role in the plot. Unfortunately, this too was so overemphasised that it became a larger though unwelcome character than most of the others. And there were hints of preaching, where the author’s opinion crept through the narrative.

The dialogue is generic, and sprinkled with the faux pas of ‘do you remembers’ to bring in backstory. That said, the story is awash with backstory, along with one of my pet-hates – replacements for the word said. This reached fever pitch when, during a telephone conversation, someone ‘winked’ at the protagonist. I wondered for a moment if Francesca had become temporarily telepathic! It’s a small detail, but one which jerked me out of the story.

The twists lack surprise, the red herrings glow with luminous ferocity and the reveal is, as I feared it would be, protracted, and clunks like a pantomime script. The Black Sheep disappointed. Despite that, it is an easy read, and may interest readers who like family thrillers.