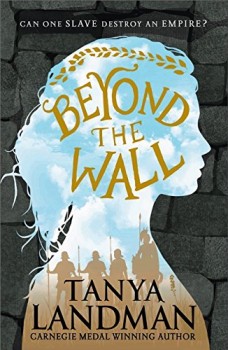 Cassia is the slave of a wealthy Roman living in Roman Britain. She escapes the attention of her master and runs to Roman London and then on up beyond Hadrian’s Wall, saving her brother and meeting Marcus, who she is not sure she can trust.

This novel is set in a Britain that has been occupied by the Romans for 300 years. Cassia is the daughter of a slave who was the especial concubine of her cruel master. She is kept pure and safe because of this and because she is being kept to be the companion of her master’s son. When her mother is sold and her owner’s son dies, she becomes the object of the sexual desire of her master and rather than submit she attacks him and flees.

Cassia gets to Roman London, a city which is graphically described with a superb attention to detail. Despite the obvious difference in scale to the modern city, the author manages to portray a climate and culture that is identifiable as the nature of the capital, remaining the same through Victorian London to the present day. This makes it easy to relate to interactions and dangers of living and moving around this place as a single, unprotected girl at a time when women had no rights, particularly when poor and alone.

Then Cassia meets Marcus, again identifiable in modern terms as a young aspirant entrepreneur, charismatic, handsome and worldly. He takes Cassia under his wing and protects her, but because of her experiences it takes a lot for her to learn to trust him.

Eventually they decide they need to leave London and travel north to where Cassia and her brother can be safe. This journey is very cleverly described with some unpleasant contextual details, such as the boy lying bound and covered in a cart with the body of a dead dog to simulate a funeral procession.

When they reach the north, Cassia’s heritage becomes apparent, Marcus’s nature and intentions become clear and the relationship between the two main protagonists is tested to the limit.

I found this book delightful. It has an air of easy historical accuracy. It is also very evocative of the time of its setting and gives a strong feeling of a country that has been occupied for too long by a country whose grip is now weakening. Tanya Landman’s ability to set this strong sense of history against a context of emotion and place that can be identified with by the reader makes both the plot and the setting very accessible. This book is aimed at the teen/young adult audience and deserves to be very successful.