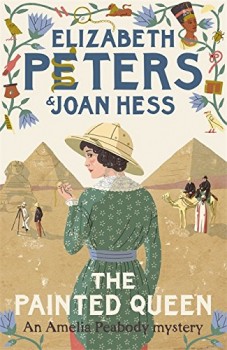 Amelia Peabody and her archaeologist husband Radcliffe Emerson are again in danger as they search for a priceless, stolen bust of legendary Queen Nefertiti.

Goodbye, Amelia Peabody! A whole generation of readers will miss you. This 20th and final book in the series featuring the adventures of the unconventional, opinionated, self-confident archaeologist’s wife, always correctly dressed for the occasion whether it be afternoon tea in Shepheard’s Hotel in Cairo or crawling through bat guano and bones in an excavation somewhere in the Upper Nile valley, marks the end of an era of entertainment and humour.

Peters, real name Barbara Mertz, embarked on the book, her version of one of the great archaeological mysteries, hoping to put, in her own words: “The cat among the pigeons.” She died before she could complete it. The story was unwillingly taken over by her friend and fellow mystery novelist Joan Hess (who herself died in November 2017), under pressure from Mertz’s family and friends. Despite her noble efforts, the joins show, hardly aided by some slapdash proof-reading such as changes in a character’s clothing in just a few paragraphs, virtually teetotallers swigging whiskey and soda, to say nothing of the rather tangled relationships of the principal players!

But if you have come late to the saga of Amelia and her square-jawed, short-tempered, brilliant archaeologist husband Radcliffe Emerson, enjoy this story for what it is – a clever, brilliantly researched mockery of the Great English Adventure Mystery, punctuated throughout by genuine and often sardonic humour.

It’s set in the uncertain years just before the outbreak of World War One, and deals with the discovery – and disappearance – of the one of the most precious ancient Egyptian artefacts, the bust of Nefertiti, fabled queen and stepmother to King Tutankhamun.

Peters was a scholar and renowned Egyptologist. She visited sites all over the country at a time of intense archaeological activity for background for her often outrageous but always entertaining stories. She understood the country and its peoples as well as any outsider can and her books were always historically accurate. She was also a proto-feminist, one of that strange breed of English and American women whose sense of self-purpose was so strong they ventured into what many would believe danger without a thought. Her heroine Amelia is very much a reflection of her own character.

The story opens when Amelia arrives in sweaty Cairo for another excavation season, and her bath in one of the Empire’s iconic hotels is rudely interrupted by a man wearing a gold-rimmed monocle – and a knife in his back. It soon becomes plain someone has saved her from a would-be assassin. Could that be grave-robber, criminal and the master of disguise, Sethos, a strangely courtly and chivalric villain she has encountered many times before?

She and Emerson head to the excavation site at Tell el-Armana, where they encounter and overcome a series of the most ingenious and unlikely problems. A parade of English brothers in monocles die under circumstances suitable to their strange names, new relics are unearthed, a diabolical mystery solved and Sethos offers his final challenge.

Throughout, Amelia, an early version of Miss Marple crossed with Lara Croft, remains cool, confident, immaculately dressed and suitably, if unconventionally, equipped, except when ‘being friendly’ with her husband, details of which she thankfully spares her ‘Dear Readers!’

It’s true that this final story, which fills a gap in the Peabody saga, is not the same as when written by Peters on her own, but this remarkable heroine with her warmth, humour and sheer gung-ho enthusiasm makes this well worth reading as a standalone. If you do, you’ll certainly want to explore the earlier stories.