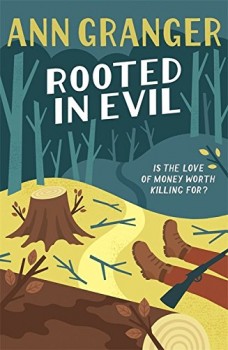 When a man’s body is found in a Cotswold wood, it looks like suicide, but DI Jess Campbell and Superintendent Ian Carter soon discover looks can be deceptive.

The impressively productive Ann Granger – this is her 33rd novel and the fifth murder mystery to feature the Gloucestershire police pairing of Detective Inspector Jess Campbell and Superintendent Ian Carter – never changes her style. Although set in the familiar and almost cosy mode of traditional country policing where there’s no little or no violent action, no chases, no shoot-outs, no evil master criminals, she manages to gain and hold the readers’ attention with her cleverly drawn characters. She has a telling eye for human foibles and frailties, relies on the reasons for the crime and a touch of psychology mixed with investigative technique to make what could be quite mundane and ordinary stories something which will keep you turning pages.

When the body of a man, with half his head blown away and a shotgun at his feet, is found in a Cotswold wood it looks like suicide. But looks can be deceptive and it doesn’t take long for the police to identify inconsistencies which challenge this conclusion and point to murder.

As investigations continue it becomes clear the dead man had upset more than a few in the close-knit village community of Weston St Ambrose. His stepsister has been bailing him out of financial trouble against the wishes of her starchy ex-army officer husband, but, with money worries still mounting, the victim had become desperate. Something of a charmer, a good-looking loser and user, he had extracted money where he could to sustain a dubious and expensive lifestyle of wheeling and dealing.

There are plenty of possible suspects for his killing, but as witnesses emerge, together with family secrets, the focus tightens to the local area. Critics may say that while Granger’s plotting is solid and intricate it has an old-fashioned feel, with one-dimensional detectives simply there to detect and devoid of personal life or background. True, apart from the odd mention of DNA testing or mobile phones, there is little modern about this story. But I, like many other readers I am sure, am heartily sick of psychologically damaged, drunk investigators making free with the basics of law for increasingly more ‘spectacular’ cases.

In my years as a crime reporter it was obvious that police work, to misquote John H Arnold, is: “Long periods of boredom punctuated by short moments of excitement.” Routine, checks and balances are everything and Granger captures that remarkably well, both in the case and the slowly growing personal relationship between Campbell and Carter, both serious adults willing to take their time over a major decision.

The story contains a fair amount of extraneous detail, much of it interesting but not too relevant to the plot and quite distracting – just like any major investigation. Some of the withholding or outright interference with evidence may appear beyond credible, but there’s nowt so strange as folk – particularly privileged folk in an environment which has, of large, yet to catch up with all of the 21st century.

Old-fashioned it may appear to some, but as with all Granger’s offerings, Rooted in Evil makes little pretence to being other than a clever procedural – and, as such, there are few better authors.