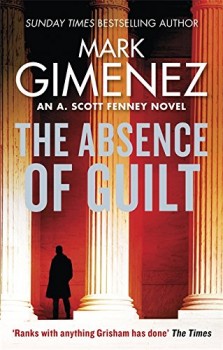 The Absence of Guilt

District Judge Scott Fenney is asked to rule on the detention of suspected terrorists, and becomes involved with a plot to bring down the Dallas Cowboys Stadium.

Scott Fenney was once a high-flying Dallas corporate lawyer whose life was changed by two cases. In one he defended a prostitute; in the other he helped his estranged wife defeat a charge of murder. He now lives a less lucrative but far more satisfying life as a judge, with two 13-year-old girls for company: his daughters Boo and Pajamae, that of the prostitute he represented.

His current job as a federal judge is normally lacking in excitement, being largely the analysis of lengthy pleadings on obscure issues. But in the same week he gets two cases which bring him into the spotlight. One is a challenge brought by Texas and other states to the President’s ruling that action to deport illegal immigrants should be discontinued, which they claim pre-empts the sole right of Congress to make law.

The other is the government’s request for pre-trial detention for a group of Muslims, who have been arrested on a tip-off that they are planning an attack on the Super Bowl match planned in the Cowboys stadium in a few weeks time. The leader of the group, al Mustafa, makes inflammatory speeches, and although the authorities have no hard evidence both the attorney general and the President are pressuring Fenney to keep them incarcerated until the event.

Both cases provide the opportunity for fairly lengthy digressions by the author into the American constitution, and the separation of powers which, according to the author, makes the US system of government so admirable. The system of checks and balances may make it difficult to get stuff done, but also makes it difficult to do bad stuff, a consideration that could be said to have particular relevance currently.

All this is merely background, however, to the thriller which emerges from the revelations that there is indeed a plot in progress. Although one of the Muslim brothers has reservations about their plans, the other is determined, clever enough to evade frantic FBI efforts to locate them, and to initiate distractions at the critical period. As Super Bowl day arrives with the plot still live, the stakes become much higher.

I did find Gimenez’ rehearsal of Islamic views somewhat repetitive, and the cuteness of Fenney’s daughters a little overemphasised. But there is certainly plenty of excitement here, notwithstanding the constitutional lecture: terrorist violence, Mexican drug lords and their henchmen, an affair between Fenney and his FBI bodyguard, and a felon co-opted to trace communications on the ‘dark web’. This could be the very definition of a thriller.