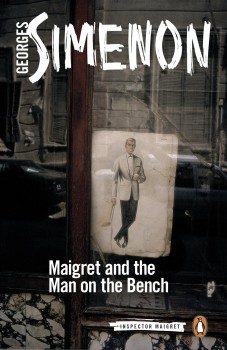 Maigret and the Man on the Bench

Maigret receives a call from Inspector Neveu of the Troisième Arrondissement saying that a man has been stabbed to death on the Boulevard Saint-Martin, that the murder seems out of the ordinary and that he would be grateful for his help.

It is October and in Paris winter is in the air. Maigret is sitting at his desk when he receives a call from Inspector Neveu of the 3rd Arrondissement to say that a man has been found stabbed to death in the Boulevard Saint Martin. Although it is getting dark, Maigret decides to go the crime scene. It turns out that the body had been found not in the street itself but in an alleyway closed at the end, with a door nailed shut.

The body carries identification showing that the man is Louis Thouret who lived in Juvisy. Surprisingly, the man’s wallet contains upwards of three thousand francs, as well as an old photograph of a little girl. When Maigret visits the man’s address Thouret’s wife tells him that he worked at Kaplan and Zanin’s as a deputy manager. When Maigret takes her to make a formal identification of the body she says that neither the yellow shoes nor the tie he was wearing were his, that she would never allow him to dress in such a vulgar fashion. It turns out that the photograph is the dead man’s daughter, who turns up at the Quai des Orfevres, her uncle having informed her of her father’s death.

Maigret is intrigued by the fact that Mme Thouret seems less concerned about the fact that her husband has been murdered than that it had taken place under what she regards as disgraceful circumstances. When he interviews the daughter, Monique, he gets the impression that she too is less than grief-stricken. The reaction of first the wife and then the daughter causes Maigret to sympathise with the dead man, making him determined to find the murderer.

As the case progresses it becomes clear that Thouret had not had much of a life. His wife had been very much concerned with trying to maintain a social position equal to that of her two sisters, who also lived in Juvisy. Unfortunately, her husband’s job - he was a warehouseman, not a deputy manager – left her at a disadvantage compared with her sisters, both of whose husbands had more respectable and better paid employment.

Maigret is puzzled when it turns out that the dead man’s firm had gone into liquidation two years previously because he had apparently been going out and returning as if he were still employed, his wife suspecting nothing. There was also the question of the source of the money that he brought home as usual. Maigret is equally puzzled by the fact that nothing had been stolen from the dead man and he becomes more and more intrigued as the investigation progresses, particularly when it becomes clear that Thouret was a very pleasant and likable man.

This is as typical a Maigret novel as Simenon ever wrote. There are no spectacular developments, though there is a considerable element of surprise as Maigret begins to learn more about Thouret. It is typical because it carries a large amount of human sympathy, reminding us that there are many people who, whilst appearing to live normal lives, are far from happy. Mme Leone - a perpetual spinster who lives with her aged mother - had been secretly in love with Thouret, and M Saimbraim, a colleague of Thouret who had been very generous towards him, is old and sick. It turns out that the yellow shoes were a symbol of freedom. No longer confined to a house he had never wanted and had bought only to satisfy his ambitious wife, Thouret saw the loss of his job as an opportunity to have a little happiness before it was too late. It is this gift of being able to introduce simple but eternal truths into his narrative that makes Simenon’s writing so appealing.