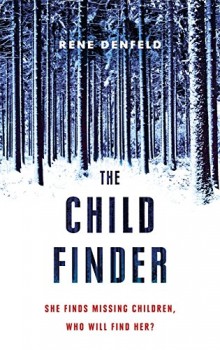 Naomi is a private investigator who specialises in finding missing children. Her latest case is that of five-year-old Madison Culver, who went missing three years ago.

Naomi is a private investigator who specialises in finding missing children. Sometimes she finds them alive. On some occasions she’s able to provide closure but not a happy ending. When she starts a job, she has no idea which category it will fall into. She tries to view her clients objectively, knowing that in some cases someone in the family already knows what has happened to the missing child.

Her latest case is that of five-year-old Madison Culver who went missing three years ago when her family drove to the Skookum National Forest in the snowy northwest of America in search of a Christmas tree. Unseen by her parents, Madison walked off into the snow and was never found. A blizzard quickly covered all traces of where the little girl had been, and despite an extensive search, Madison was never found. Her mother is still convinced she’s alive and turns to Naomi for help.

Naomi agrees to take on the case, and starts her investigations in the forest where Madison was last seen. Hampered by suspicious locals and an inhospitable landscape that seems determined not to give up its secrets, Naomi approaches the case with tenacious logic and the sort of insight that only comes from a background of deep understanding. The search takes her back into her own past and forces her to confront memories and emotions she’s done her best to suppress.

The Child Finder is a searingly powerful look deep into the cold heart of child abuse but at the same time, it’s tempered by an equally deep seam of humanity that made me question everything I initially believed and forced me to look at the world through different eyes. The point of view of the Snow Girl, as she comes to know herself, is poignant and painful. The writing has the darkly lyrical feel of a Grimm brothers’ folktale, and the snowy landscape provides the perfect setting, with chills all around. At times the narrative becomes almost too painful to read, especially the sub-plot of a missing baby, but I was unable to turn away.

I read the book in two sittings, desperately needing to know the fate of Madison Culver. The Child Finder is a book that will get under your skin and will leave behind an uncomfortable mix of optimism and horror. I don’t know if the child finder will return, but it doesn’t feel like her story is over yet.