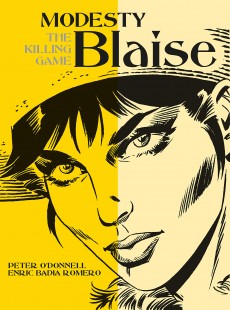 Modesty and Willie go up against another set of villains in three more iconic comic strip adventures.

If I had to choose just one author’s books to take to a desert island, Peter O’Donnell’s Modesty Blaise books and comic strips would be jostling for a place in my luggage with my dog-eared copies of The Hobbit and The Lord of the Rings. I’ve been addicted to the adventures of Modesty Blaise and her loyal sidekick Willie Garvin from my early teens, and rediscovering the Titan re-prints of the comic strips has been one of the great joys of reviewing. But it seems that all good things must come to an end, as Titan have finally reached the end of O’Donnell’s prolific output.

In The Killing Game, Modesty and Willie return for three more stories that, as ever, epitomise the words action and adventure. When The Last Aristocrat opens, the pair are holidaying on Corfu with their close friend, intelligence boss Sir Gerald Tarrant, when another old friend drops in, quite literally. Italian journalist Guido Biganzoli always does an unparalleled job of bringing mayhem into Modesty’s life and this time, when he arrives by parachute with his fiancée Aniela is no exception.

But Guido also gives Modesty and Willie an opportunity to do a favour for Tarrant, by snooping on the activities of a notorious criminal nicknamed Granny Smythe, an old enemy from their days running their own criminal enterprise, The Network. The Last Aristocrat is shot through with the rich vein of humour that suffuses all O’Donnell’s adventure stories, but even with the eccentric Guido the Jinx in the mix, there’s a dark edge to the story and a very real sense of danger.

The title story, The Killing Game, starts with Modesty at home in the village of Benildon, enjoying an outing at the village fete, which appears as a backdrop in several of O’Donnell’s stories. She receives an unusual proposition from a man called Mr Kromm, who mistakenly thinks Modesty would be interested in a big game hunt he runs on his immense private estate in New Guinea. Modesty is no stranger to killing, but she doesn’t hunt animals, and turns Kromm down flat. She quickly learns that Kromm has his sights on some very different game when she and Willie are dropped into the jungle without weapons and told that it’s them who’ll be hunted. The pair have to bring all their fabled ingenuity into play in some great action scenes that prove why O’Donnell is still the grand master of how to stage a fight.

The Zombie pits Modesty against a woman who has been brought up to suppress all emotion and become a superb fighting machine in support of a twisted ideology foisted on her by another of O’Donnell’s brilliantly inventive and ever-chilling villains. The story also brings to life on the page one of Modesty’s lovers, Danny Chavasse, who fans of the books will remember from Last Day in Limbo. Danny worked for Modesty in her criminal days and was a master of the art of the honey trap, seducing women for whatever information he’d been tasked with extracting.

O’Donnell also does an excellent job of subverting stereotypes, and never more so with Danny, who successfully does what women are so often portrayed as doing, and it’s Danny’s skills that play a large part in bringing this caper to a successful conclusion, with the help of some circus elephants! The story also showcases O’Donnell’s ability to write snappy dialogue that jumps off the page every bit as successfully as the fight scenes. There’s an often surreal sense of humour that runs through some of the scenes and it’s not hard to see why some of Modesty and Willie’s opponents are so easily utterly bemused and wrong-footed by the pair and their equally entertaining friends and former colleagues.

The strength of O’Donnell’s writing leaps vividly to life under the penmanship of illustrator Enric Badia Romero. He perfectly captures the characters and their settings, from underwater caves, to jungles, to the sheer verve of Willie’s circus friends. For me, the dark beauty of Romero’s Modesty is the one I see when I read the books and his portrayal of Willie’s square-jawed, craggily handsome face is the one I picture at her side.

All I can hope for now is that Titan will re-issue the few titles in the middle of the run that are impossible to easily obtain apart from at positively ruinous prices on the internet. If begging will help, I’m prepared to write endless emails!