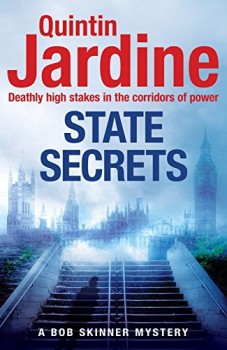 Former Chief Constable Bob Skinner has been asked to the Palace of Westminster to talk about the possibility of him accepting a peerage, which puts him in the right place at the right time to investigate a crime that will shock the nation.

My relationship with ex-cop Bob Skinner goes back a very long way to his first appearance, nearly a quarter of a century ago, in Skinner’s Rules. I’ve stuck with him through the ups and occasional downs of his career and several tempestuous marriages, two of them to the same person. And although I keep wondering if I should call things off between us, I keep coming back for more.

Cards on the table: I felt thoroughly cheated when ‘Big Bob’ Skinner didn’t take the top job in the ambitious merger of Scotland’s various policing divisions into the unified but unpopular Police Scotland. Having stuck with him for so long, I’d come to expect that he would end up at the pinnacle of his career and then die of a heart attack, having had a dicky ticker for a while. Despite that, he doesn’t show any signs of keeling over yet.

I didn’t take to his various off-piste investigations as a private citizen, largely because Skinner has always seemed something of a fish out of water without his warrant card. I also haven’t enjoyed this shift to Skinner narrating his own adventures. The voice has never felt quite right, and his latest outing in State Secrets is no exception, but at least here we get to see Skinner back at the heart of a police investigation, albeit a clandestine one.

Skinner has been asked to the Palace of Westminster to be sounded out over his willingness to accept a Labour peerage, as his skill at butting heads with his opponents is deemed exactly what is needed to galvanise the ranks of slightly somnolent peers. While he’s there, the Prime Minister is discovered in her room, a letter opener embedded in her skull. Skinner is asked by Amanda Dennis, the Director of M15 to lead the investigation. The higher echelons in Westminster want the culprit found before the news of the Prime Minister’s death is made public, but all Skinner is allowed by way of an investigating team is his old friend and former colleague, Neil McIlhenney, now a commander in the Metropolitan Police.

Asking Bob Skinner to be diplomatic is a bit like asking the bull in the china shop if it wouldn’t mind being a teensy-weensy bit more careful. Skinner rapidly cuts a swathe through uncooperative politicians and superior Whitehall mandarins, making an impressive crop of enemies and even the occasional friend. It’s not hard to draw comparisons with our current crop of politicians, floundering in the ever-deepening morass left behind by the disastrous Brexit referendum. It’s easy to see through the thin facades to the leaders of both main parties, although I’m not convinced that Theresa May is anywhere near as well thought of as her fictitious counterpart.

The waters become increasingly murky and shark-infested as the plot shoots off in several unexpected directions until, despite my early intentions, I was thoroughly immersed in Skinner’s investigation and cheering him on every time he took on a politician and roundly trounced them. I still hanker after the days of Skinner as a real cop, surrounded by the ever-growing ranks of Scotland’s finest, but State Secrets was a good substitute, so my divorce petition has been popped back in the drawer for the time being.