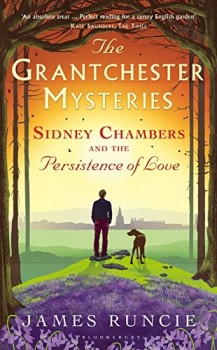 Sidney Chambers and the Persistence of Love

Sidney Chambers, now Archdeacon of Ely, starts 1975 with some puzzles to solve around the persistence of love – love of wife and husband, love of children, of friends and unrequited love.

Sidney Chambers, now Archdeacon of Ely, starts 1975 with three puzzles to solve. A man is found dead in the woods with a bag of poisonous plants he'd been picking. A precious medieval book is stolen from a Cambridge college library. Sidney's teenage nephew goes missing. All of these are solved by Sidney's patented method of persistently talking to people and asking questions until they either tell him the answers or give up and confess.

Although the two crimes are real puzzles, there are no real twists and turns and Sidney ambles through them as though working out The Times’ easier crossword. Interspersing these puzzles are his friend Amanda's scheme for buying a possible Goya painting at auction, a rape going to trial and Sidney's worries about his wife's friendship with a German music teacher.

Sidney is required to provide comfort and moral support to the rape victim and her husband, and the story highlights the terrible time a rape victim had in court in the 1970s. Sidney is firmly on her side, so that's all right and enlightened. Sidney, however, is less enlightened about his wife's friendship with a German music teacher, while she is expected to take him travelling away with Amanda to assist in the purchase of a possible Goya painting.

Throughout the whole book, I couldn’t get over the feeling that I was getting second-hand emotion. Runcie relays Sidney’s thoughts and his puzzling over people and situations. And Sidney does puzzle over practically everything. It all seems very calm and detached, like someone telling a story from a long time ago that happened almost to someone else where everyone involved sounds the same. This similar tone deadens real tragedy and any joys felt. Nobody seems to get excited, nobody exclaims or raises their voices, least of all Sidney himself.

This is a safe book, I think, for those of a particularly nervous disposition to read.