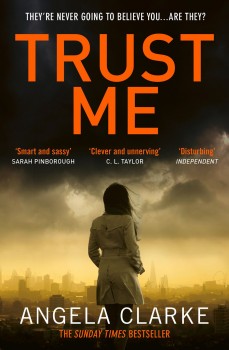 Kate Adiyiah saw a violent sexual attack on the internet, but proving it is impossible as the video no longer exists.

Kate Adiyiah watches in horror as a vicious rape unfolds in front of her eyes. But she doesn’t know who the rapist or his victim are. She doesn’t know where it is taking place. And by the time the police arrive, all evidence has disappeared. Because Kate was watching the horrific act on streaming, and the video has been wiped from the internet.

DS Nasreen Cudmore, thanks to her old school-friend Freddie Venton, is making progress on her investigation into the Tower Hamlet Massive gang. She has identified a high-ranking member of the gang, Paul Robertson, but he and his teenage daughter Amber have disappeared. Neither of them have been on the radar for over a year.

Kate wants someone to believe her, and search for the rape victim. Freddie wants to find Amber, yet she is almost certain she is dead. But when Kate contacts Nasreen and Kate, not only do they start to believe that Amber could have been the victim from Kate’s living nightmare, they also think Kate could be the next person on the attacker’s agenda.

I haven’t read the first two Angela Clarke ‘Freddie and Nas’ novels, but was looking forward to a police procedural, particularly one with a social media twist and with women in the leading rolls. The idea sounded current, topical and full of potential.

The book is written in the third person past tense, with each short chapter devoted to one of the main characters, and I thought it was going to be a fast-paced read. Unfortunately, the narration is undecided; not quite a closed third-person point of view, not quite omniscient. The result is a mess of random introspections and actions where, if there is any more than one person in the scene, it is often difficult to work out who the unspecified hes or shes are referring to. For the first half of the book, I didn’t sense the writer knew any more than I which way the story was going. The saving grace is, in general, the dialogue is tagged with the speaker’s name.

There are chapters devoted to the criminals as well as Kate, Freddie and Nas, along with an opener from the missing girl, Amber, and a seemingly unrelated 13-word chapter in the form of a message. Perhaps it was the hopping from one point of view to another, maybe it was the writing style that left me cold, but I couldn’t empathise with a single person in this book. They are all two dimensional and quite uninspiring.

Kate, as a teacher, comes across as unbelievable, particularly when she starts seeing her dead baby as a grown woman. Freddie is so utterly stereotyped – the tough, sharp-mouthed bitch who is on the outside looking in. Nas is a wishy-washy girl who spends as much time mooning over her boss, with whom she had an illicit one-night-stand six months before, as she does working on the case. And when she is not doing that, she is being a drippy rag who should understand her best friend’s behaviour by now.

The plot shows potential, with a disturbingly graphic opening and the premise of teenagers filming horrific scenes. Unfortunately, it is spoilt by cliched writing that drips with unimaginative analogies, similes and metaphors. And it is not helped by obtrusive backstory or half-hearted red herrings that glow in the dark with their overtness.

But where some will read love-interest, I see a weak attempt to flesh out the main characters. Where others will see Nas and Freddie’s false assumptions as human nature, I see them as a poor means of keeping the reader guessing by trying to relate two distinct investigations; the first of which was a non-starter, the second, entirely predictable. But despite that, the book does have satisfyingly dark scenes and I read it in one sitting.