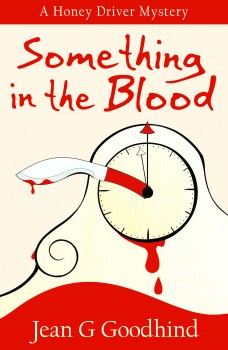 Something in the Blood

When Honey Driver is given the job of acting as liaison between the Bath Hotels Association and the local police, she isn’t expecting to get involved in a murder investigation. But it’s certainly more exciting than worrying about washing up and fending off her matchmaking mother.

I don’t normally venture into the cosier side of the genre, but in this instance I was tempted by the setting, as Bath is a city I know and like. For the first few chapters, I wondered if I’d made a mistake, as I’m not used to books where the strongest expletive appears to be ‘drat’, but the descriptions of Bath, seen through the eyes of hotelier Hannah Driver, known to everyone other than her relentlessly matchmaking mother as Honey, were excellent and proved enough to keep me on board, while I started to develop a liking for the characters.

Jean G Goodhind sets the scene well for a relatively gentle, but entertaining mystery, without the usual copious splattering of gore. Something In Her Blood is untaxing entertainment, which is certainly no bad thing. In cosies, the biggest hurdle to overcome is that of finding a halfway plausible reason to have the protagonist involved in events, and in this case Goodhind manages that by inventing – or at least I presume it’s an invention – the role of crime liaison officer between the Bath Hotels Association and the local police. Association chairman Caspar St John Gervais doesn’t want the town’s reputation to be sullied in any way by crime, and especially not with the Americans, so when a tourist from the United States goes missing, Honey is drafted in to see what she can find out.

It comes as no surprise when Honey’s opposite number in the police turns out to be good-looking and irritating in equal measure. Detective Sergeant Steve Doherty has a hint of bad boy about him but despite that, Honey still doesn’t want him anywhere near her mother, for obvious reasons. She’s having enough trouble fending off her mother’s attempts to fix her up with any unmarried or widowed man in what seems like a 30 mile radius of the city.

Honey soon discovers that there’s more to the missing tourist than meets the eye. He’s there under a false name and seems to have been a private investigator. Caspar St John Gervais is horrified when he turns up dead, and insists Honey carries on sleuthing, something that she soon starts to get a taste for.

The relationship between Honey and DS Doherty, a man who prefers to be called by his surname, manages to stay just on the right side of cliché, and is clearly destined to play a part in the rest of the series. Honey’s exploits as an amateur sleuth manage to carry the story along at a reasonable pace and the book is likely to appeal to anyone who likes the cosy side of crime allied successfully with a strong sense of place.