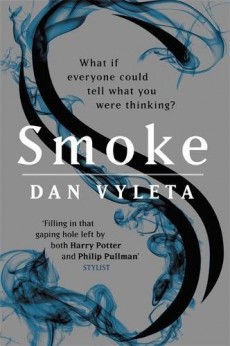 In an alternative Victorian Britain all people have developed a trait wherein thick black smoke emits from their body whenever they experience anger, lust, hatred or envy. Two boys who meet at a boarding school become embroiled in plots to uncover the nature and possible cure for this affliction.

At a stuffy and prestigious boarding school for children of the rich and privileged, Charlie, a good and conventional young man, befriends Thomas, who has only recently joined the school and about whom there are rumours of a dark past. Thomas comes under the unfortunate attention of Julius, a school prefect, who goads him into an attack which results in serious disciplinary intervention from the very fat headteacher.

Charlie and Thomas are invited to spend Christmas at the home of a distant relative of Thomas’s. Here the boys meet Livia, a very upright and moral girl, determined because of her high moral standards, to control her emission of smoke. From this point relationships become complicated. Julius is the estranged son of Thomas’s aunt and he turns up at the house. The boys leave to go to London but they are attacked on the way. Livia has left to go with them and they are forced to go into hiding, relying on the support of people they meet along the way. The machinations of teachers at the school, the headteacher and Thomas’s aunt all lead them to a final confrontation which appears to resolve some questions but sets the scene for further catastrophic events.

A major protagonist in the book is the smoke that issues from all people, uncontrolled in children and controlled in refined adults. The story is set in an alternative Victorian Britain, in which London is not merely soot covered because of growing industry but also because of the uncontrolled emission of smoke from its uncaring inhabitants. The nature of this smoke and the attempts of many of the protagonists to either investigate its cause or to control its emission are the reason for much of the action in this book.

The style and plot are redolent of Philip Pullman’s Dark Materials books. Despite the suggestion on the cover, it has very little which links it in style or content to Harry Potter. However, conceptually the premise is very engaging, the characters are delightfully real and almost all of them are not really very likeable. Despite that, it was easy to empathise with them and become engaged with the growing emotions between the three main protagonists and the fascinating politics surrounding the challenges caused by living with smoke in the overly moral and repressive culture of this vision of Victorian Britain.