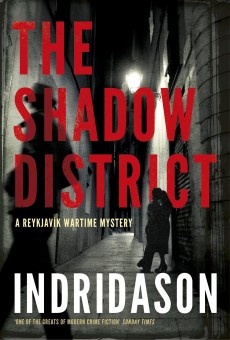 In wartime Reykjavik, a body of a young woman is found behind the National Theatre. An Icelander and a Canadian start investigation. In the present times an old man is discovered dead in his own bed. Newspaper cuttings found in his home report that particular death.

1944, Reykjavik. Ingiborg, daughter of a prominent civil servant, and her secret boyfriend Frank, an American soldier, come across a body of a young woman behind the National Theatre. The building, used as an army supply depot, is a ‘shadow district’ – a popular meeting place for illicit lovers. They flee from the scene, partly because their relationship would be regarded as inappropriate in the wartime climate when liaisons between Icelandic girls and Tommies, and then the Yanks, create wide-spread moral panic.

The investigation of the case is led by an Icelandic detective Flóvent and a member of the American military police, an Icelander from the Canadian Army, Stephan Thorson. Both men, weighted with their own personal emotional baggage, become friends while taking diligent steps to talk to anyone who might have known the strangled Rósamunda, a talented seamstress, working for a well-known and elitist dressmaker.

No answers seem forthcoming but they find out that the girl had been raped some time earlier, and she had mentioned elves. The modern investigative techniques are still in their infancy and the two policemen’s search for the killer relies only what they are told. They come close to establishing who was responsible for the horrible fate of Rósamunda. Yet nothing is ever recorded and the case never comes to trial.

In the present day, 90-year-old Stefán Thórdarson is discovered dead in his own bed, smothered with a pillow. Marta, the inspector in charge, baffled by lack of any evidence and motives for the murder, is at loss and so allows Konrád, a retired former colleague, to start his own search.

In the dead man’s home Konrád finds newspaper cuttings dating back to World War II and reporting the ‘shadow district’ murder. The old detective is intrigued by this small discovery and his own experience of growing up in the same neighbourhood, and rakes through his own memories, including spiritualist séances, his nasty con artist of a father, and the tough life in the slums. That notorious and dangerous area was flanked by the library, court and abattoir, with everything in between representing all walks of life.

It appeara that Thórdarson led a quiet uneventful life terribly affected by the events from the war, when he was stationed in Reykjavik, during the Normandy landings and later when he worked as a civil engineer. Judging by what he had kept with his papers, the unsolved murder of Rósamunda troubled him, and soon Konrád realises the connection between Stefán Thórdarson and Stephan Thorson.

The Shadow District, beautifully translated by Victoria Cribb, brings together the shadowy history of one of Reykjavik’s districts, affected by the wartime occupation by the Allies, and the ghosts of loneliness, fear and superstition. Arnaldur Indriðason again draws on the Icelandic wartime history and reflects on how the past influences the present, including the strong belief by many Icelanders in huldufólk, the elves or hidden people. The belief was firmly grounded in ancient folklore and closely linked to poverty, lack of education and therefore also to a strict class distinctions as the nostalgia for a quieter life turns very dark.

The author’s calm trademark style, without verbal fireworks and exciting thrills but with a methodical and logical storyline, is nevertheless engaging and very human. Explosive shocking revelations deliver a satisfying conclusion for the reader, although not for some of the characters, and I think that the novel is an excellent start to a new classic series.