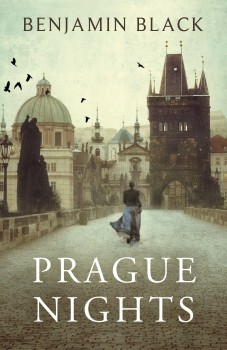 Ambitious young doctor Christian Stern arrives in Prague and stumbles on the dead body of  the mistress of the Holy Roman Emperor and is plunged into a world of intrigues and rivalries in a court and country on the verge of a religious war.

Benjamin Black, nom de plume for Irish writer John Banville, has turned out some pretty good stuff including his successful Quirke series. This confused and confusing mystery, set in the Prague winter of 1599, certainly isn’t an addition to it!

Its protagonist, Christian Stern, narrating with the benefit of age, is the bastard son of a bishop, a remarkably vain and unlikeable young man when he arrives in the Czech capital with ambitions to make his mark at the court the Holy Roman Emperor, Rudolf II.

The arrogant Stern, who calls himself ‘doctor’ after a few terms teaching at the university where he was a student, gets blind drunk on his first night and stumbles on the body of a woman in the snow. The murdered woman is Magda Kroll, the emperor’s mistress. Stern is arrested and plunged into the plots and rivalries of a divided court, country and continent on the verge of the terrible Thirty Years War which pitted Catholic against Protestant.

He is taken up by one of the competing sides and brought to the attention of the superstitious and half-mad satyr of a weak and isolated emperor who is, or has been, convinced Stern represents the fulfilment of a dream prophesy.

Rudolf, a man given to whims and with an overwhelming fascination with the occult, tasks him with the discovery of the girl’s killer, but Stern has neither the wit nor the means to succeed. Hopelessly out of his depth, he follows leads supplied by others for their own ends, and is caught in a web of intrigues, plots, conspiracies, covert relationships and jostling for power among a dissolute court whose two major players are on opposite sides of the religious divide.

Despite some finely-honed descriptions that evoke the period, the almost standard references to the occult, alchemy and magic, and the introduction of historical characters such as the inventor, magician and conman Dr John Dee, his Irish sidekick (the manipulative Edward Kelly), and the great astronomer Johannes Kepler, Black’s characters struggle to evoke any, let alone a sympathetic, reaction.

There is simply no suspense. Stern blunders on ineffectually, never engaged in the unfolding drama, ignorant of the relationships between other characters, and at a loss as to what to do.

What information he does learn is inconsequential, as everyone else already knows it. Even in the end, he is a passive observer who has achieved nothing except some spectacular sex in various cold Prague settings. The events simply happen, the characters are cardboard cut-outs, with the two who could have brought it to some life, Rudolf and his equally insane son Don Julius Caesar, hardly allowed to emerge from the background.

Black’s archaic writing style is engaging enough, but there is no literary magic or real life in this uneventful narrative which frequently borders on the dreary and occasionally the stunningly boring.