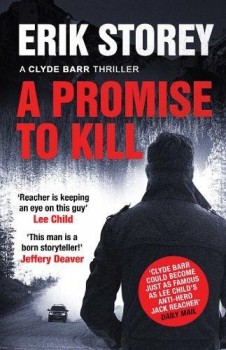 A Promise To Kill

Clyde Barr is drifting in the wilds of Utah when he gets drawn in to a struggle between a small town and a gang of bikers who brook no opposition.

Clyde Barr’s history of engagements in wars overseas has made him weary of human conflict, but he puts aside the solace of the mountains that he seeks when he comes across an old man in need of medical attention. The man is a Ute Native American from a reservation nearby, and Barr agrees to stay with his daughter Lawana and grandson Taylor to help run their small ranch until he recovers.

Locals are uneasy, however. The Reapers, a gang of bikers, has arrived in town, and make it clear that they are entitled to take what they like. The inevitable confrontations quickly escalate into violence. When two teenage girls are abducted the Ute decide to get them back. Barr persuades them to follow his plan of action which involves him and Lawana acting as decoys.

In the action which follows Barr and Lawana take off in a large tractor-trailer parked at the Reaper’s camp. They find that the trailer is loaded with military hardware, and make a connection with the search by the authorities reported in the media. With the Reapers taking action to prevent communications with the outside world, it is up to Barr and those of the locals he can recruit to combat a well-armed bunch of thugs prepared to stop at nothing to gain their evil ends.

In his first outing, Nothing Short of Dying, Barr showed an ability to evade the bullets of his enemies that tested the suspension of disbelief, and I am happy to say that here his abilities stay just this side of miraculous. That is not to say that he emerges less than heroic – after several savage beatings, he remains cool and exploits every opportunity to take the fight against his foes, being captured and escaping, and so on.

The plot just about hangs together and the book is action from start to finish with barely a pause for breath, so perhaps it is understandable that there is little by way of characterisation. The disillusion of the Ute and the struggle of Lawana to give Taylor a vision of his opportunities are barely touched upon.

Barr himself is the only one whose internal dialogue we get a glimpse of, and that is mainly ruminations on his violent past, the girls who unfortunately perished by the way, and his musings about why he always ends up in the thick of it. We do perhaps get a clue, though, when he joins up with an ex-military, Ute: ‘this guy had never met a gun he didn’t like. My kind of person.’