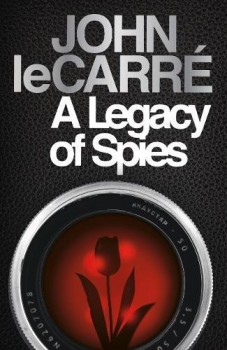 A Legacy of Spies

Peter Guillam, formerly of MI6, now retired and living in Brittany, receives a letter from the Circus. It states that an urgent situation has arisen and suggests (meaning ‘insists’) that he come to London immediately.

A Legacy of Spies is an unusual novel because what it largely does is to tell a story that was first told in another novel by John le Carré half a century ago. That book was The Spy Who Came in from the Cold, probably the best example of a Cold War spy thriller because it was always more than a Cold War spy thriller.

The difference between the two is that the earlier novel is told from the point of view of the characters involved in what became known as Operation Windfall, whereas A Legacy of Spies is based on the recollections of one of those who organised it and pulled the strings – Peter Guillam. Whilst it is not necessary to have a knowledge of the first novel in order to enjoy the second, it is certainly helpful. Both can be legitimately described as difficult in the sense that the reader is expected to take in, almost by assimilation, the essential nature of the espionage business.

At the beginning of this story Peter Guillam is retired and living on his farm in coastal Brittany. His mother was French and the farm has been in her family for five generations. There is a quick résumé of his family history told with considerable irony – the death of his father at the hands of the Gestapo, followed by his English public school education and his initial introduction to espionage.

Then occurs the incident that interrupts his retirement and leaves him pondering the morality of his service with the Circus. He receives a letter from a man named Butterfield inviting him (though he sees it as virtually an order) to attend the Circus to discuss a matter in which he had played ‘a significant role’ years before. He learns that the descendants of two people who had been killed in Operation Windfall – still a state secret – blame the Circus and are contemplating legal action. It becomes clear to Guillam that Butterfield is looking for an opportunity to exonerate the intelligence services and to lay the blame at his door.

Attitudes have changed over the years. The modern demand for transparency would have seemed not so much unnecessary as totally self-defeating during the Cold War. The intelligence services regarded themselves as defenders of freedom, in the pursuit of which greater good the lesser good might occasionally have to be sacrificed. This, however, is a concept that time-servers like Butterfield and his feral accomplice, Laura, would never understand and Guillam sees little point in trying to explain it.

He is, however, determined not to take the blame for something that he knows he could never have prevented. After all, there had been a traitor within the Circus during the time of Windfall. He sets out on his own to prove, if not his innocence, at least the honest professionalism of his part in Windfall, and goes in search of secret documents and witnesses. Le Carré maintains interest by very cleverly moving the account in time. Sometimes Guillam is in the present being interviewed and harassed by Butterfield and Laura. At other times he is back in the midst of Windfall, most memorably and sadly with Tulip.

References to characters from previous novels abound – Bill Haydon, Toby Esterhase, Connie Sachs, George Smiley, of course, and many more. Some of them actually participate in the novel and, whether trustworthy or not, loyal or not, we feel a kind of kinship with them and open our arms to them once again. Perhaps le Carré feels something of the same and is revisiting the years of his greatest triumphs. But there is a complete absence of sentimentality.  Perhaps, like Mistress Quickly’s death of Falstaff speech in Henry V, this final display of characters from years past satisfies curiosity and brings a sense of completeness.

The last word has to be with Smiley. Asking Guillam why they spent their lives as they did, he says: “If I had a mission – if I was ever aware of one beyond our business with the enemy, it was to Europe. If I was heartless I was heartless for Europe. If I had an unattainable ideal, it was of leading Europe out of her darkness and towards a new age of reason. I have it still.”