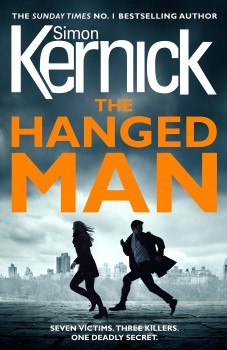 DI Ray Mason and cop-turned-PI Tina Boyd are on the trail of a group of powerful, sadistic killers, but the odds are stacked against them.

The Hanged Man starts in a characteristic fashion for one of Kernick’s thrillers, with a seemingly ordinary man desperately trying to stay out of the clutches of a remorseless killer. Hugh Manning is forced to watch as his wife is brutally murdered, but he sees an opportunity and seizes it, managing to get away from his killers, but it looks like he’s only won a temporary reprieve.

DI Ray Mason is a copper who’s never far from trouble. His last outing, The Bone Field, left quite a few dangling threads and here, Kernick picks them up and does a good job of weaving them into his current story without indulging in too much cumbersome backstory. He gets that over with pretty quickly, with Mason talking directly to his audience and recapping the events that led to the gruesome discovery of the partially dissolved remains of seven women in a remote farmhouse in Wales. The police have no clues as to the identity of the murdered women and their only lead lies in following the ownership of the house, bought by an offshore company in 1996. That enquiry leads eventually to the same Hugh Manning from the violent, heart-thumping prologue.

Mason is now working with Dan Watts, a former boxer who retired from the sport after one of his trademark punches left an opponent in hospital in a coma from which he never emerged. On the surface, Watts is the archetypal straight-as-a-die copper, with a perfect family and a happy home life, except that his wife has kicked him out because of his habit of having one night stands, and now he’s living in a crummy flat and barely seeing the children he loves. Mason, on the other hand, is in a relationship at last, seeing former maverick cop-turned-private investigator Tina Boyd. They’re just finding their feet together, but seem close to putting their chequered pasts behind them and finding happiness.

Kernick has an enviable knack of turning out readable police thrillers with great action scenes, engaging characters and a strong storyline, and The Hanged Man is no exception. His habit of putting ordinary people in extraordinary circumstances and then seeing how they cope is one that has always appealed to me, and even though Hugh Manning is far from a sympathetic character, I was still thoroughly caught up in his attempts to survive against what seemed at times like utterly insurmountable odds.

Mason and Boyd make a interesting pair, and it was good to see them in action again, on the hunt for the rich, powerful and twisted group who have been killing women and getting away with it for a very long time. Mason and Boyd are up against powerful opponents and Mason eventually reaches the point where he has to decide between his career and doing what seems right. His decisions lead to a powerful and action-packed conclusion. The question that remains is whether we’ll be seeing more of this duo.