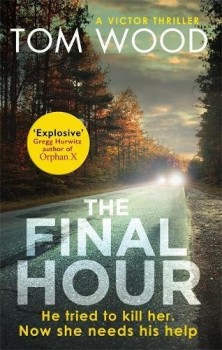 Victor is an assassin by trade and he’s very good at his job. So good that even his former employers now want him dead.

Victor is an assassin by trade. There’s a price on his head and a number of people want him dead – probably with good reason – including his former employers in the British intelligence service. But Victor is a hard man to track down, and an even harder man to kill.

CIA agent Antonio Alvarez is determined to succeed where others have failed. He has Victor in his sights and won’t give up easily. Add a beautiful and dangerous woman to the mix, shake well and wait for the top to blow off.

I found it hard to get to grips with The Final Hour as I felt like I’d been thrown into the story half way through. Constance, a female assassin, is in hospital having been poisoned by Victor with some sort of nerve toxin that has reduced her to a state of helplessness. It’s uncertain whether she’ll recover or not, but Victor isn’t the only person who wants her dead.

Constance – or Raven, as she prefers to be called – claws her way back from the grip of the poison and is clearly a tough cookie, but I found it hard to take her seriously when she suffers from flashes of angst and irritation when Victor and others refuse to call her by her adopted name. Giving her an attractive codename is no substitute for giving her character and recognisable motivation.

To be honest, I wasn’t terribly impressed with Victor, either. It’s obvious he’s meant to be a man of mystery, but the lack of detail about his past just served to leave a large blank in my memory where he’s concerned. He’s clearly very good at what he does, and there are some chillingly unpleasant scenes when he wants to extract information from people, but I never felt I knew enough about him to really care.

The book moves jerkily in a series of short chapters, constantly changing point of view, and for most of the book there’s a distinct lack of action. I felt particularly short-changed when one fight scene turned out to be nothing more than a piece of internal wish-fulfilment. And I was even grumpier when a dog was introduced for the sole purpose of being bumped off a couple of sentences later. This sort of thing seems to be back in vogue in crime and thrillers at the moment and it’s really getting on my nerves. Come on, folks, play fair, stick to the rule that no pets are harmed in the making of the book!

There’s the obligatory shadowy organisation known as the Consensus, but we can blame Constance – sorry, I mean Raven – for that naming cliché, and there was someone codenamed Tesseract, which made me wonder if I’d strayed onto the set of a Marvel superhero film, but quite what they were all about was never entirely clear.

I want more from a thriller these days than a few shoot-outs and torture scenes, and I need to know enough about the characters to care about them, even if I don’t like them, so The Final Hour didn’t work for me as an introduction to Victor and his world. But if you’ve already got to know him in previous books, your mileage may very well vary. Writing a series whilst not bogging it down with backstory is a hard trick to master without the reader feeling they’ve been dumped in a fast-flowing river which has just whooshed an awful lot of water under the bridge while you’re still trying to head for the shore. In this case, I floundered too much for comfort and sank rather than swam.