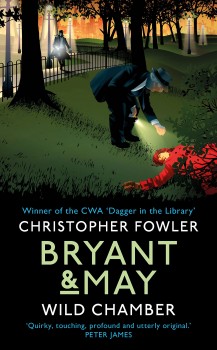 A small boy dies following an incident in a road tunnel. A gardener sees a murder in a London park. Inspectors Bryant & May work against the clock to find out what connects the events.

Traffic is diverted into a tunnel under the Thames due to an on-going police chase elsewhere that seems to have had links with a previous Bryant and May investigation. A shunt between vehicles results in the later death of a small boy. Some time later a gardener in a London park witnesses the murder of a woman in a red coat. But the park gates are locked and he is unable to find the killer. Inspectors Bryant and May take on the mysteries, working against the clock whilst plans are made to close down the Peculiar Crimes Unit for ever.

As always, the sheer creativity of each book in this series provides a most fascinating read for anyone interested in history, particularly of London. For example, Bryant talks about the history of St Olave’s church, Samuel Pepys, the Mother Goose pantomime, the first plague victim, and the grocers who supplied the crates for the Boston Tea Party are just some of the interesting features that make the reader want to visit. There are numerous snippets like this, each as fascinating as the other, all emanating from Inspector Bryant’s mind. At one point, he has a conversation with WS Gilbert – and Gilbert’s thinking helps Bryant to solve the crime.

It is questionable how long Bryant can continue. So much is made of his peculiarities that sometimes the other characters diminish as to be almost unmemorable. Attempts are made to bring them to life but it is difficult to follow their stories, especially when the names are similar such as Bryant, Banbury, Bimsley. A helpful list is provided early in the book on a staff roster list but the detail in the book gets so interesting at times that confusion reigns!

Who would have known that the removal of park railings during the war wasn’t just about melting them down as part of the war effort. Socialism and the removal of privilege were also involved. Similarly, there is fascinating detail about London’s greenery: “Parks are not gardens and gardens are not squares.” The author then goes on to list a further 13 categories of green space, each different, one from the other. But the information is all given in such an amusing way that it is bound to create sparks of interest.

One difficulty with all this is that reading a book as part of a busy lifestyle means that it gets picked up and put down on many occasions. Trying to keep track of the plot which involves a number of further murders and twists is not easy. This book seemed particularly long before the final resolution, but there was so much to admire on the way that by the end there is relief when the words “Bryant & May will return” appear.