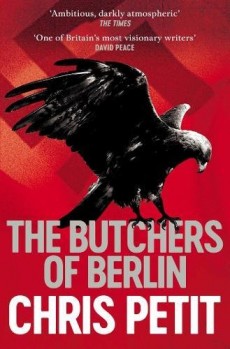 The Butchers of Berlin

An old man shoots and kills an apartment block warden and then himself. When it turns out that he was Jewish and when other, apparently linked, murders begin to occur, the Berlin police force comes under pressure.

It is 1943 and there are no more victories for a German army struggling in Russia.  At home there are shortages of everything and cigarettes have more value than the actual currency. In addition, the RAF has begun to reduce Berlin to ruins. Above all, however, for the Jews of Berlin it is the end of whatever tolerance still remained. They are now being rounded up, whole apartment blocks at a time, and shipped out to the East.

No reason is given for an old man’s shooting of an apartment block warden or for his own suicide and the reader assumes that the solution of the crime will be a main theme of the book. Although, in the context of what is happening in the streets, it doesn’t seem particularly important, a high level decision is made that it will be the subject of a full police investigation. August Schlegel, a policeman hitherto concerned with financial crime, finds himself recruited to the homicide department. Again the reason is not given, apart from staff shortages, and we are left with a suspicion that it indicates a desire to avoid learning the truth of the crime. The reader who assumes that things will become clearer as the novel progresses will find themselves sadly mistaken.

Schlegel finds himself working alongside a member of the SS and closely involved with the Gestapo. Clearly the investigation involves high politics but it is difficult to work out why it should be so important.

The problem is that the plot meanders in every possible direction. There are murders of a particularly brutal kind, details of which are repeated time and time again. There is black-marketeering and corruption on a huge scale and various individuals taking advantage of the chaotic situation in Berlin simply to enrich themselves, but it is all very generalised and unconvincing. A lot of space is allocated to two Jewish girls who have managed to avoid the round-up, but it is not clear why. Much is made of the fact that they are lesbians, but once again it is difficult to see why that matters.

To describe the plot as labyrinthine would be an understatement, incomprehensible being a better word. Murders continue to occur at regular intervals, but whilst it is clear that they are in some way connected, the reader is still left in the dark. More and more characters are introduced, including Schlegel’s upper class and snobbish English mother and a rather pretentious artist who allows the two girls to live in his apartment. The main character, Schlegel, is quite ineffective but he never seems to realize that that is precisely what he is supposed to be.

Eventually there is what is intended to be a climactic ending but one cannot help feeling that it is merely a device to enable the villains to be killed off. Suddenly the Hitler Youth are involved, the RAF play a part as they bomb Berlin once again and  one of the villains is disposed of in a particularly gruesome way, as if to justify the title. It is a novel that contains little in the way of thrills or excitement, the most descriptive word being sensationalism.