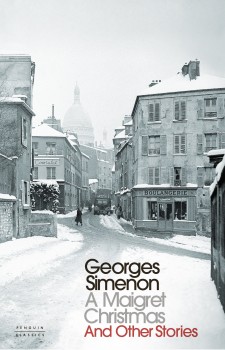 This book consists of three Simenon short stories, with only the title story involving the detective himself. Other characters frequently involved in Maigret investigations – Janvier and Lognon – also turn up, though only incidentally. All are set at Christmas time but only the last has a recognisably Christmas theme. Obviously the investigation is on a smaller scale than usual and doesn’t go any further than the street in which Maigret lives, but it is nonetheless intriguing.

There are hints that the story, in addition to the usual investigation, is to develop in a sentimental way – not surprising in a story involving a child at Christmas. However, Georges Simenon avoids this, whilst at the same time showing us a side of Madame Maigret that we have not previously seen.

The second story, Seven Small Crosses in a Notebook, concerns Andre Lecoeur, who works as a telephone operator in the Paris police control room. It is a dull job, but one that he carries out very conscientiously, keeping detailed records of the crimes reported to him from the various arrondissement police stations. There is nothing to suggest that this Christmas Eve will be any different, but when his brother and nephew become involved his work takes a very personal turn. There are those occasions in a man’s life when he is suddenly confronted by a set of circumstances that allows him to step out of the ordinary and to shine. Although Lecoeur is quite unaware of it, this Christmas Eve will present him with such an opportunity.

The Little Restaurant near the Place Des Ternes, the third story – and the one most clearly related to the spirit of Christmas – involves a suicide on Christmas Eve. It takes place in a virtually empty restaurant when a man drinking alone suddenly shoots himself in the head. The two women present, both alone, are interviewed by the police. The younger of the two, who gives her name as Martine Cornu, says that she came from Yport. This makes the elder woman, Jeanne Chartrain, take notice because she too came from the same area and frequently used to attend dances at the Café Cornu, the owners of which had several young children who used to get in the way of the dancers. Jeanne, who now makes her living on the Paris streets, thinks back nostalgically and rather sadly to those days. She remembers that she used to call the children tadpoles and warn her partner not to trip over them. She thinks this girl might have been one of the Cornu children.

When Martine leaves, Jeanne – for reasons she can’t explain – decides to follow her, even though she had decided to go home early for once. Eventually Martine goes into a bar, with Jeanne close behind her. It is here that the story develops, almost alone the lines of the Good King Wenceslas fable. Jeanne senses that the younger woman needs help and, almost on a whim, decides that she will be the one to provide it. It is a charming story and one that shows us another aspect of Simenon.