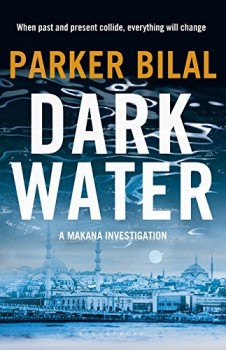 Exiled policeman Makana is induced to visit Istanbul to help British Intelligence prevent a chemical warfare specialist falling into the hands of a dangerous terrorist.

This is the sixth in the series of Makana investigations. Mekana is a former police detective from Sudan, who fled when his subordinate Mek Nimr took advantage of a regime change to attack him. For the past 12 years, Makana has been working in Cairo as a private investigator, grieving for the wife he lost in Nimr's assassination attempt, and haunted by the rumour that his daughter Nasra survived.

The action is set in 2006, when Makana receives a visit from Marcus Winslow, a British Secret Intelligence agent. Winslow says that Nizari, a chemical weapons specialist, is known to be offering his services to Abu Hilal, a known terrorist. After a meeting in Spain, Nizari was kidnapped by Mossad, the Israeli intelligence service, but managed to evade his captors in Istanbul, and is willing to accept British help.

Winslow claims that Makana would make a suitable intermediary since he is one of the few people Nazari will trust, based on a recommendation of Makana's former boss. Makana regards this as dubious, and is reluctant to become involved, were it not that Winslow offers a special inducement: Nazari has information about Nasra, who he asserts is still alive.

Makana runs into problems before he even leaves Cairo, in the form of Egyptian intelligence, who realise that Makana is carrying a false passport, but he is allowed to leave. In Istanbul, Nizari fails to show up at the arranged rendezvous and Makana is attacked and relieved of his passport. Things become very complicated: it becomes clear that several parties are involved, all with different agendas, and that some of them at least have no compunction about killing to achieve their ends.

In a strange city, where he does not speak the language, a pawn in a deadly game where the players and objectives are unclear, Makana remains cool under extreme pressure. He survives several assaults, and manages to evade local police when bodies start to fall, leaving Makana in the frame. And all this added to the mental turmoil generated by glimpses of a young woman who resembles his wife, who he knows can only be his daughter Nasra.

As we have come to expect from previous books in the series, the action is non-stop and densely plotted. Makana is his usual self: unflappable, quick-thinking and always moving towards his own objectives. At the same time he has a straightforward and engaging manner which enables him to find friends in the right places, including a local taxi-driver and an Istanbul policeman.

This series has been excellent from the start, and this latest may be the best yet. The nature of Makana's mission makes it closer to a spy novel than a detective story, peopled with an interesting cast. With Makana at last poised to re-establish contact with his missing daughter, the series looks set for more exciting developments.