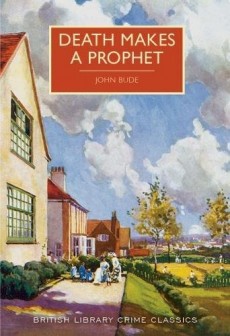 The cult of Coo, a quasi-Egyptian religion, is riven by jealousies, greed and ambition which lead to murder.

Quirky is hardly the word to describe the sixth of John Bude’s books to be republished by the British Library under its Crime Classics imprint. Witty, odd, almost anything you like – but for all that strangely compelling and certainly entertaining.

To even begin to appreciate the book, you have to understand something about the author. Bude was the pseudonym of Ernest Elmore, a writer in the golden age of crime fiction and a co-founder of the Crime Writers’ Association. He was also well known in the theatre as a producer and director, and this mystery, first published in 1947, just two years after the end of the war, bears more of a resemblance to an Ealing comedy than detective fiction. And what sort of a detective story does not even introduce its central character until well after halfway through the story?

But Bude has picked his setting and his characters with care for the maximum humorous effect, although some are so far over the top as to be almost grotesque. The title – a heavy pun – says it all and should prepare you for what is to come!

Much of the action takes place in Welworth Garden City, an obvious parody of Welwyn, founded by Sir Ebenezer Howard in the 1920s as part of his dream of planned towns which combined the benefits while avoiding the disadvantages, of both city and countryside.

By the middle 1940s Welworth, like its source, has developed into a self-consciously arty-crafty collection of mock-Tudor, mock-Georgian mansions for the nouveau riche and its ‘full measure of social life’ recommended by Howard has expanded to all sorts of unlikely functions – including a soap opera-ish religious cult, the Children of Osiris, or Coo for short.

Coo-ism is riven by the petty jealousies, resentments and politics of its members. Its founder and High Prophet, the mild and otherwordly Eustace Mildman, lives in a state of Yogi-like non-being and at the mercy of Alicia Hagge-Smith, a widow of a powerful personality and the cult’s financial prop and virtual director

The plot develops at a leisurely pace, a gentle but effective lampooning of the ethos of the new towns and also unusual sects – a favourite subject for many of the golden age writers. Bude develops his collection of oddities pleasantly, but with plenty of bite. From the off it becomes quite clear that at least one is a charlatan – and a prime candidate for a sticky end.

But when the murders, two at a go, eventually arrive more than halfway through the story, the arrival of Scotland Yard’s Inspector Meredith turns this from a near-theatrical romp into a more straightforward whodunit.

Meredith, the major player in many of Bude’s stories, is as ever, hardly even a two-dimensional character. He has no hang-ups or dark past. He’s hardly more than a detection machine which collects facts, processes them, solves the most improbable mysteries and goes on to the next one. In short, the perfect policeman!

His lack of any real character allows the ensemble to continue to play their parts to perfection and the rich collection do so with gusto. A couple of clever plot developments will keep you reading what is one of a kind, a witty, but sadly neglected classic of British crime fiction.