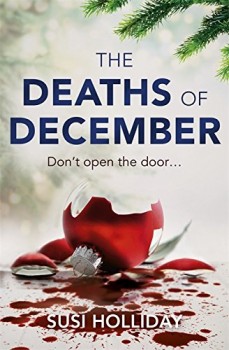 The Deaths of December

When an advent calendar arrives at the police station, it’s the beginning of a murderous lead-up to Christmas.

DC Becky Greene’s morning starts uneventfully, until she opens the large brown envelope addressed ‘to a detective who knows what to do.’ Inside she finds an advent calendar. It’s not one filled with chocolates, or even cheesy nativity scenes, though. Behind 20 of the doors are miniature photos of corpses. They are real-life crime scenes.

Carly is working the Christmas artisanal markets, selling her goods. But she is more interested in the enigmatic man, Caleb, at the stand next to hers. That’s hardly surprising, as her inattentive husband might as well not exist.

DS Eddie Carmine is getting nowhere with his latest case, a seemingly motiveless yet brutal murder of a woman in her own home. Two weeks in and there’s not a single lead. It looks like his boss is intent on winding investigations down, until Becky shows Eddie the advent calendar and he sees the victim’s body on show. Although he is unsure where they are heading with the macabre calendar, it is an excuse for Eddie to stay away from his loveless home.

With four blank doors in the calendar, Eddie and Becky know they are on borrowed time. And the murderer is getting closer to home.

This is a police procedural written in the present tense, with most chapters devoted to three of the four main characters, Eddie, Becky and Carly, and written in the third person. The other chapters are from the photographer’s (the murderer) point of view, and are written in the first person. Sometimes this modus operandum works, giving us a deeper understanding of the criminal. In this instance, the photographer’s chapters are just a long drawn-out reveal with an unconvincing voice. Instead of creating a three-dimensional, flawed person, or a terrifying character, the writer ended up with a cardboard criminal and a whinger.

The other main characters are little better. Clearly there were two reasons for including the personal lives of Becky and Eddie, one being to flesh them out as people. But their entourages, let alone the sub-plots, are so superficial that it merely slows the wobbly pacing and makes Becky and Eddie stereotypes. Carly is obviously on the photographer’s hit list, but comes across as shallow and self-entitled.

The plot is gimmicky yet transparent, leaving no room for suspense. I at no time felt there was either a need for, or a use of intelligence (from the detectives or the reader) to work out what was going on. And even though there are more murders than Inspector Barnaby would have to deal with in an entire series of Midsomer Murders, the imbalance of show and tell leaves the reader less traumatised than if they had opened their own advent calendar to find someone had stolen the chocolates from behind the doors. The dialogue is lazy and unconvincing, the writing style is a study in the uninhibited use of clichés and at times, the authorial voice intruded too obviously.

That said, The Deaths of December is an easy read, and one that could be comfortably finished in one sitting between spotting Santa Claus squeezing his corpulent frame down the chimney, and everyone getting stuck into the roast turkey.