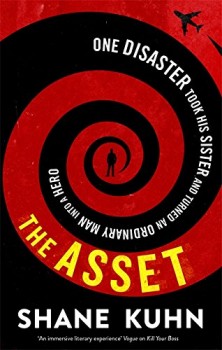 Kennedy’s younger sister Belle had been one of the victims of 9/11 and he never forgot that the last words he spoke to her were in anger. In an attempt to make amends, he abandons his studies and joins the Transport Security Administration as an aviation security specialist.

The prologue, with its first italicised sentence, ‘We’re all going to die’, provides a dramatic and vivid opening to the novel. A man, clearly very agitated, is queueing in a checkpoint line at Atlanta International Airport when he sees a man in a police department uniform. Suddenly, discarding his overcoat, the man reveals a vest with what appear to be sticks of dynamite attached to it. A child screams out that he has a bomb, alarms go off, the policeman draws his pistol and the man begins to run, stampeding the crowd. The novel is an account of the events that led to this situation.

Kennedy’s younger sister, Belle, had been one of the victims of 9/11 and he never forgot that the last words he spoke to her were in anger. In an attempt to make amends, he abandons his studies and joins the Transport Security Administration as an aviation security specialist.

People envy Kennedy’s business travel, not realising that it is a rather boring means to an end, the end being to train TSA officers at airports all over the country. Originally studying to be an architect, he had found that a somewhat empty ambition after his sister’s death at the twin towers. He had decided to do all he could to ensure that such tragedies were not repeated and to become a consultant in aviation security seemed the best way to achieve this. He is sustained in his determination by advice on self-improvement by best-selling author, Noah Krutz, to whom he frequently refers.

One day Kennedy receives a telephone call from a man who claims to be from the Direction Générale de l’Aviation Civile in Paris saying that they would like to make use of his services. He arranges a meeting with the caller at a private air terminal and, before he knows what is happening, he is shot with a tranquillising dart and kidnapped, apparently by Arabs. He finds himself in pursuit of a terrorist by the name of Lentz, who is particularly dangerous in that he has amassed a huge amount of money and is able to cajole and bribe people in positions of authority whilst he remains hidden in the background.

The pursuit involves a large amount of action which encourages the reader to keep turning the pages. There are, however, two significant faults in the telling. The first is that there is an over-concentration on plot at the expense of character development. Even Kennedy himself is one-dimensional and essentially uninteresting – something that remains true even when he falls in love with a woman he has known for a long time. Some of the characters seem to exist only to provide a thrilling chapter end when they are suddenly and quite unexpectedly killed.

The second problem is the excessive use made of the very latest IT. To a reader not versed in such techniques the description of the methods used is altogether too facile. It seems there is no code that cannot be broken, no computer that cannot be hacked, and both with the minimum of effort.

These criticisms aside, however, there is much in the book to enjoy as the hero lurches from one crisis to another. Whether the love affair is believable, however, is another matter.