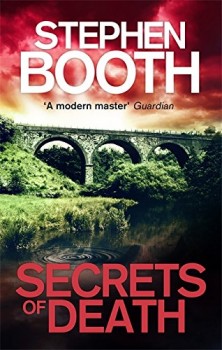 The Peak District is home to tourists of all types, but a rash of suicides is not what it wants to play host to.

I was a latecomer to Stephen Booth’s long-running police procedural series featuring coppers Ben Cooper and Diane Fry, only arriving about two-thirds of the way through the run. The series has been something of a slow burn for me, but the previous book The Murder Road did manage to finally haul me on-board, and I galloped through Secrets of Death with positively indecent haste.

The Peak District National Park is experiencing an unwelcome rash of suicides, with seemingly unconnected people coming from far and wide to shuffle off their mortal coils in a variety of ways in picturesque locations. Whatever is happening, it’s not a good advert for an area that relies heavily on tourism, and DI Ben Cooper is tasked with the job of seeing whether anything can be found to link the diverse deaths together.

Naturally, his investigation brings him onto a collision course with his somewhat dour and difficult to like former colleague DS Diane Fry, now working out of Nottingham. Fry’s not a character who has ever appealed much to me, but I did have to sympathise with her plight when her sister arrives, uninvited, with new baby in tow and promptly proceeds to take over Fry’s spare room. I could practically smell the unappealing combination of nappies and milky burps that wafted in with them.

Ben Cooper’s suspicions that there is more to the current glut of ‘suicide tourists’ than his superiors would like to think is confirmed when he finds a strange business card just containing the words The Secrets of Death on two of them. But while he’s still trying to trace the link, the bodies continue to pile up.

As ever, it’s Booth’s depiction of the ever-varied Peak District scenery that takes pride of place in the book, and here it has a very special, albeit gruesome, part to play in the story. Ben Cooper continues to interest me as a character and, in a first for me, I even enjoyed the part played by Diane Fry. The supporting cast stays strong as well, with side-kick Carol Villiers coming more to the forefront and there’s a welcome return for the amusingly annoying Gavin Murfin, recently retired but now back as a civilian contractor.

The overlap between Cooper’s investigation and the one Fry is involved in mesh together well, and Booth provides a solidly entertaining police procedural with an unparalleled sense of place.