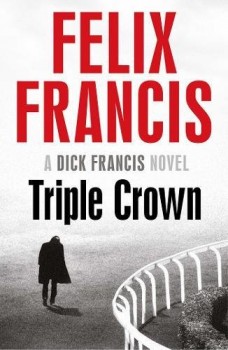 Something is rotten at the heart of American horse racing, and British Horse Racing Authority investigator Jeff Hinkley goes undercover to help his US colleagues.

Unlike his father, who rarely wrote about the same character more than once, with the honourable exception of the great Sid Halley, Felix Francis has turned once again to Jeff Hinkley, an investigator with the British Horseracing Authority. Hinkley’s relationship with his girlfriend is over and he’s got itchy feet, so he’s easily tempted by the chance to go undercover in the States, on secondment to the US federal Anti-Corruption in Sports Agency (FACSA).

Hinkley has to pass himself off as a groom in order to get close to a corruption ring operating at the heart of American horse-racing. As usual, there’s a plethora of nobbling and fixing by a variety of means, all of which are explained in a constant procession of mini-info dumps on everything under the sun. I ended the book feeling somewhat force-fed, knowing more about equine drugs – legal and illegal – than I ever wanted to know.

And therein lies Felix Francis’ main problem. Compared to his father, who could draw you effortlessly in to the world of racing and make you feel you’d known it and been a part of it all your life, Felix’s writing is clunky and progresses in a series of jerks from one explanation to the next, interspersed with a lot of introspection and a small amount of action. The scenes when Hinkley uses one of his disguises and puts on his best Oirish accent will stick with me for some while – just not for the right reasons! He stopped short of donning a false moustache, but it was a close-run thing …

Hinkley is by no means my favourite character, but he is at times ill-served by his creator, who is not above hitting him with the stupid stick for the sake of the plot. Wanting to yell ‘You idiot!’ is not conducive to a smooth ride. But that said, the ups and downs of the racing industry is a never-ending source of interest and entertainment and the completist in me can’t bear the thought of not reading the next book out of the Francis stable.