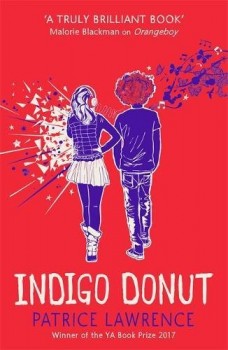 Indigo’s mother was murdered when she was a small child, but the past has a nasty habit of coming back to haunt her.

Seventeen-year-old Indigo lives with foster carer Keely. To say that Indigo has had a difficult start in life would be an understatement. When she was four, her drug addict mother was killed by Indigo’s father, and after a short-lived spell with her grandparents, she’s spent her life with a succession of carers. Indigo finds it hard to control her anger, something she conceptualises as The Thing inside her that she constantly struggles to keep under control. But The Thing isn’t easily denied and as a result, changes of both school and carer are a frequent part of Indigo’s life.

Pitt Academy is something of a last chance saloon for Indigo. She needs to pass some exams to give her a better chance of getting a job when she has to move on from her latest carer. But that’s easier said than done. Indigo knows nothing in her life is ever permanent, and that doesn’t provide much incentive to do anything other than drift through a succession of homes and schools, doing her best not to get too attached to anyone or anything. She’s an easy target for bullies at school and keeping The Thing in check gets harder and harder until one day she loses control and quickly becomes the talk of the school.

Bailey, also 17, comes from a very different background. His mum is a teacher and his dad’s a social worker. Despite the occasional strain in his parents’ marriage, he has a stable family life, a world apart from Indigo’s upbringing. Bailey finds himself fascinated by Indigo and wants to get to know her better, but she doesn’t intend to let anyone get close to her.

When a homeless man starts following Bailey and asking him to do something to help Indigo, he’s naturally suspicious, but finds himself drawn into her history in a way that he doesn’t expect, which puts their fragile friendship at risk.

Indigo Donut, by Patrice Lawrence, the author of the excellent Orangeboy, presents a pair of utterly believable teenagers. Indigo is feisty and complex, burdened by the horror of her mother’s death, even though no one is wholly sure what she remembers for herself, least of all Indigo. Bailey is shy, determined and funny. Their tentative steps towards a relationship resemble the first faltering steps of a young fawn and there are plenty of slips and trips in the story.

Lawrence’s teenagers act and speak with complete authenticity and honesty. They are very real, as is the world they inhabit. The differences between Indigo’s home life and that of Bailey’s stand in stark contrast to each other and the knowledge that there are thousands of children and teenagers living the life Lawrence presents is both uncomfortable and profoundly depressing. Even if the system does the best it can by them, that best doesn’t seem good enough.

Indigo Donut is another brilliant story that will suck you in and leave you looking at the world through different eyes. Lawrence deserves all the awards that were heaped on Orangeboy, and her latest book is every bit as good.