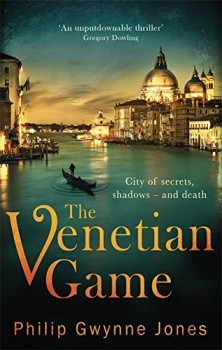 Nathan Sutherland is the English honorary consul in Venice, a post that pays nothing but allows him to be of assistance to tourists in trouble. A rather dull life suddenly becomes exciting when he is offered a considerable amount of money to look after a small package.

Nathan Sutherland lives in Venice and acts as the English honorary consul for the city. He does not receive a salary for the post, which sounds more attractive than it actually is. Essentially it involves doing what he can in an unofficial capacity to help tourists in trouble. He makes a living, such as it is, by working as a translator. It is a quiet, rather lonely life, made even more so by the fact that his wife has recently taken up a job in Edinburgh.

However, although it is unexciting, Nathan has the compensation of spending his life in what is one of the most beautiful cities in the world. Whilst he has not entirely given up the idea of joining his wife in Edinburgh, he finds it impossible to contemplate leaving Venice, with its Lagoon, Grand Canal, bridges, theatres, galleries and quaintly named streets. He is drifting along rather uncertainly until something happens to disturb his peace.

A visitor, who gives his name as Montgomery, asks him to take charge of a small package and to keep it safe for a few days. Moreover, he offers Nathen €10,000 for doing so. Such an offer makes Nathen immediately suspicious and, fearing that it may contain drugs, he refuses to take it. Suddenly there is something slightly sinister about his visitor, who only leaves after having made veiled threats. When, in spite of what he has said, Nathan finds himself reluctantly in possession of the package, he decides to find out precisely what is going on.

The novel becomes a rather conventional thriller when it transpires that the package is clearly of importance. However, it turns out that, whilst it may have a value, it is not entirely clear what that value can be. Various characters become involved in trying to fathom the mystery, but the information they obtain is conflicting and it is only towards the end of the book that the truth is revealed.

When this happens it seems to be a signal for sudden, unexpected violence. In fact, it is so sudden and so unexpected that it is barely credible. The whole tone changes to such an extent that it seems almost like a different story. The problem seems to be that up to this point the author’s main interest is Venice itself. He delights in informing the reader of its buildings, its waterways and, above all, its history. There are the beginnings of a love story, which is never developed. Instead the author appears to have his mind set firmly on a crime thriller. Unfortunately, the crime aspect is rather forced and the thrills almost non-existent.