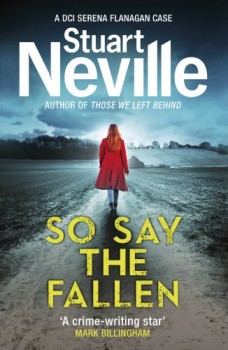 So Say The Fallen

DCI Serena Flanagan follows her instincts as she investigates the apparent suicide of a wealthy disabled man.

Stuart Neville’s Belfast series was a raw and compelling look at the dark, bleak history and landscape of Ulster. Now he has switched to a major new character – the often flawed, but always human Serena Flanagan, a detective chief inspector based in Lisburn.

It is Neville’s ability to create and portray humanity, while creating a chilling core to his always dark and powerful stories, which makes him such a compelling writer. This is more a study and exposure of human emotion, betrayal, conscience and guilt than a simple procedural.

The killer is introduced early – a tragic and tortured clergyman who has lost his faith, committed adultery with the beautiful wife of his wealthy, disabled and bedridden friend, and attempted to disguise his death as suicide. What looks like a routine ‘for the record’ suicide investigation for the enigmatic Flanagan becomes a deeply personal hunt for the truth based on little more than her instinct. She must battle her own superiors, her political bosses and a growing crisis in her personal life as her hunt develops.

All good stories must have believable characters facing questions and situations that a reader can relate to. Neville succeeds in what is a finely crafted tale with not one, but several, troubled and unsettled personalities. First there is Flanagan herself, facing the eternal problem of the pressurised nature of her job, who finds it increasingly difficult to balance the demands of work and maintain a home life.

Husband Alistair, still suffering nightmares after being stabbed during one of her previous cases, is hardly supportive, even over Flanagan’s brush with breast cancer and remission. Their children resent the time she spends away from home. She constantly has to make decisions about what comes first – her family or her job – sometimes with catastrophic consequences and is often at a loss as to how to cope.

Her dilemma is matched by that of the local minister Peter McKay. With his own tragic past, his wife dying suddenly from a brain haemorrhage, this deeply flawed and sad man is drawn to the beauty and danger offered by the dead man’s widow. His obsession first leads him into betrayal and murder and then to question the very basis of the faith he preaches, with inevitable and tragic consequences

The more Flanagan probes, the more certain she becomes that something doesn’t quite add up. And when she learns of the unexpected death of the couple’s daughter on a Spanish beach some years before, she begins to suspect a link to a cold-blooded killer.

This chilling, tortured story is all about life, its highs and lows, love and loss, temptation and guilt. It poses the question is what we perceive as important really so, shows a world in which only the strong and resolute survive and concludes with the question we have all asked at one time: “We’re going to be all right, aren’t we?”

Neville portrays his female characters with quite remarkable skill, especially his narrator Flanagan, and captures their emotions with sympathy and understanding. The scene where she prays to a god she doesn’t believe in to save her marriage is one of the most moving you’ll ever read.