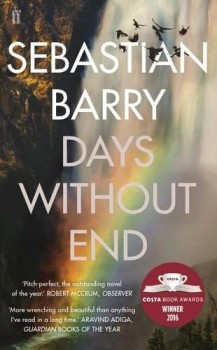 Two young men meet after they sign up for the US Army in the 1850s. Together they go through the Indian Wars and the Civil War, experiencing the horrors of battle, imprisonment and loss.

In mid-19th century America, two young men, Thomas and John, sign up for the US Army and are sent to the Indian Wars in the ‘Wild West’. They are engaged in cruel, desperate and bloodthirsty interactions between the Native Americans and the US army. The horror of this war is juxtaposed with descriptions of the grandeur of the environment, the scale of the landscape and the bounty of the wildlife of the prairies. The impact of the horrors on the young men who experience it is graphically set against an exploration of the emotions of the main protagonists and their increasingly intimate relationship.

Days Without End goes on to describe the life of the boys, post-Indian Wars, where they earn a good living in a dancing club, dressing as women, entertaining the fantasies of the miners in a totally male world.

The protagonists then find themselves in the Civil War. Here the author describes battles and atrocities and finally the excruciating boredom and cruelty of the prisoner of war camps of the Confederacy.

Subtly, at first, and then increasingly poignantly, the relationship between Thomas and John and its increasing intensity, is described. They never appear to question their love but they conceal it. This exploration of sexuality in such a male-dominated environment is subtle and sensitive and creates an additional theme to set against the primitive cruelty of life in this part of the world at that time.

As a result of the massacre of many Native American women and children, a young girl comes under the care of the two men. This adds another dimension to the emotional pull of the narrative. She becomes known as John’s daughter and is raised by the two of them as if they are a couple. The passion of the love they have for this girl dominates the final sections of the book and feeds the emotional and very satisfying end.

This book is exceptionally well-conceived and well-crafted and lyrical. It explores difficult issues with a combination of brutality and sensitivity that left me breathless and in awe.