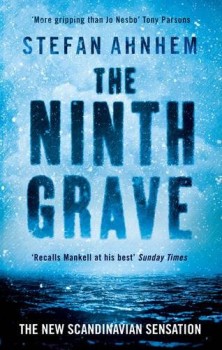 Two countries, two predators, too many victims, and winter is closing in. Fabian Risk is called on to undertake a secret investigation.

Fabian Risk, investigator in the Swedish police force in Stockholm, knows something is amiss when his boss chooses him to lead a secret investigation involving the disappearance of the country’s Minister for Justice.

Dunja Hougaard from the homicide unit in Copenhagen is thrown into an uncomfortable spotlight when her boss asks her to lead the investigation into the brutal murder of the wife of a TV celebrity in her own home.

Dunja and Fabian may live in different countries, but both are convinced they are on the trail of highly skilled serial killers. And there is more. Both Fabian and Dunja are puppets, with more people than just their bosses pulling the strings. Both of their personal lives are just about to go to hell. And both will find themselves trapped in a metaphorical maze where the only way out is via the darkest path. In the meantime, the body-count is just about to rise.

I am certain there is a hidden building in one of the northern national parks of Sweden that is a secret university for outstanding potential crime writers. There they learn their craft and a gritty, authentic style of writing. And it is only the elite who are allowed back into the world with their pens and paper (or keyboards!) The rest are shipped further north to help Santa write Christmas cards.

Stefan Anhem is clearly a first-class honours graduate, one who specialised in complex plots. Normally I can’t put a book down for one of two reasons: the book is so bad I just want to get to the end, or the story is so captivating it is addictive. This book fortunately comes into the latter category, but there is another reason I didn’t dare stop reading – spanning two countries and a heady cast of characters, it is one of the most intricate and potentially complicated books I have read in a long time.

It felt like I was juggling with a dozen balls, and if I stopped reading, even for a minute, those balls would come tumbling down and I would never be able to pick them up again. By the end, I was almost exhausted. This is not a criticism so much as a warning. If you are looking for a cosy, easy read, move on to the next bookshelf. This book is a hundred threads, made more complicated by names and places with which anglophones will struggle to feel comfortable.

The book is written in the third person past tense, but the author’s writing style allows for intimacy and immediacy. It hops from one character to the next, including investigators, criminals and victims. It flips from Denmark to Sweden at every turn, and is beautifully designed to keep the pace high and the tension rocketing. That said, if the reader doesn’t know the two countries, bearing in mind at least one of the investigators country-hops, that alone is enough to send them flipping back through the pages to check where on earth they are.

I cannot decide if the author took a long time to write this book, but one aspect that irritated was that it was set seven plus years ago, yet felt like it should and could have been set today. During editing, I would have changed the dates or rubbed them out.

The author is a senses-driven writer, which not only helped me feel as if I was shadowing the characters, but I also ended the book with a greater understanding of the two countries and their dramatic winters. While it became clear reasonably early on where the story was going, it did not detract from the pleasure.

The Ninth Grave is an intense journey, with an intricate plot and overall a satisfying conclusion, although there are one or two loose ends. Some of the scenes are vividly brutal. Others are of a sexual nature. Neither are gratuitous, but they may shock some readers. Anhem is a debut author who has already mastered atmosphere, pacing and intrigue.