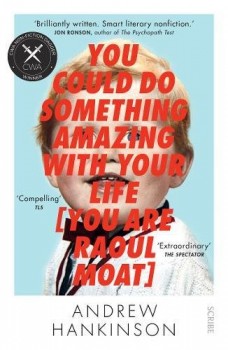 An account of the last days of Raoul Moat, told from inside his mind.

On July 1 2010, Raoul Moat is released from prison after serving a sentence for assaulting a child. He believes that his ex-girlfriend cheated on him while he was inside, and that her new boyfriend is a policeman. As Moat has repeatedly been targeted and harassed (he believes) by the police, he views this as the ultimate betrayal.

He gets hold of a gun and decides to shoot everyone who has contributed to messing up his life. He kills the boyfriend, injures his ex-girlfriend, and blinds a police officer. Moat then goes on the run, living in the wild for a week before being cornered by the police. Attempts at negotiation fail, and Moat puts the gun to his head and kills himself. In the press and in parliament, Moat is described as a callous murderer, undeserving of anyone’s pity.

This book relates Moat’s last eight days, using a second person, present tense narrative so the reader experiences it as Moat, for example: ‘Your head’s a mess right now, and you’re probably too far gone to make sense of it, but you’re definitely sorry about shooting her.’

Although I knew how this story would end, I was compelled to read on, fascinated and horrified in equal measure. It has a terrific pace. It draws on Moat’s written and spoken accounts of his life, recordings of phone calls he made, and his confession, written while he was on the run. The language is spare and unflinching, moving between what Moat says and does, and his obsession that everyone is out to get him.

The book challenges the reader to regard Moat’s story with empathy, and there are times when I wanted to scream at the chances lost to help this man and avert tragedy: the friends who colluded with him to get a gun and go on a shooting rampage; the prison officers who were warned he’d vowed revenge and acted too late to save his victims.

Being in Moat’s angry, paranoid head is an uncomfortable and gut-churning place to be, yet Andrew Hankinson never lets Moat off the hook, challenging his victim mentality and denials of wrong-doing with bald statements of fact. This is a powerful and disquieting book.