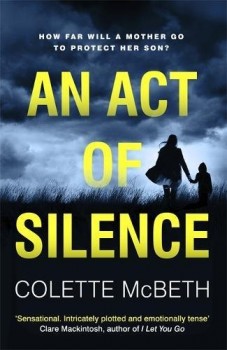 An Act of Silence

All Gabriel has ever wanted is for his mum to believe him but now he’s accused of murder and Linda is unable to help. Meanwhile, a young woman wants the world to know her terrible story.

Linda has been a successful politician: the UK Home Secretary, a woman in a place of power, who revelled in being able to change the world for the better. The centre of her own world is her only son, Gabriel, who is equally successful in the world of entertainment, though stereotypically inclined to self-destructive behaviour.

However, we also encounter Gabriel as a small, vulnerable boy who needs nothing more than to be believed by his mother – and she has failed him. The choices Linda made at that time are only a small part of the hidden world that threatens to consume both her and her son.

An Act of Silence deals with the darkest deeds of the powerful in society, who prey on those least able to protect themselves. The author deftly balances these powerful emotional themes without trivialising them and without allowing her characters an ounce of self-pity.

For the most part, it is the women in the story who have little power to influence their futures and men who do the controlling. Linda has experienced a dramatic fall from grace as her political career was sabotaged when her fight against injustice threatened the status quo – all brought about by powerful male self-interest.

The sub-plot involves a fight for justice by a young girl who has no influence and little hope of succeeding. Her circumstances are impoverished and hopeless – far removed from Linda and Gabriel’s world of apparent success and glamour. Linda has a secret she is keeping and this intrigues us but for a good part of the book we wonder what her connection with the crimes that have afflicted so many others might be.

Gabriel is a young man who seems to have made it as a successful showbiz personality but whose fame is built on unstable foundations. He has his flaws, but primarily it is the acts of those more powerful than him that threaten to destroy him – in the same way they did his mother. We empathise with and root for Gabriel and Linda as danger engulfs them.

The relationship between a child and adult, whether parent or not, is founded on trust and care and the relationship between Linda and her son highlights the problems that occur when this trust breaks down. Yet this is as nothing compared with the manipulative, self-interested characters that surround them. We know these men to be evil and it seems impossible that they will not prevail against any opposition.

Trust is a major theme of the book, but the appeal to be believed is unspoken by Gabriel, who is consequently disbelieved by his mum and later disbelieves her in turn. Mistrust develops between all the main characters: none of them is exactly what they seem and many of them have motivations and back stories that control their actions. This is a real dilemma for the reader, as we wonder whether we can trust our own judgement about who is – and who isn’t – trustworthy.

The author courageously draws her main theme from certain major news stories from the past decade. The idea that those in public life are protected from suspicion by their celebrity or power is critical to the plot – we don’t want to believe that our heroes have feet of clay.

If the book has a flaw it is that, initially at least, the many changes of time and voice that are confusing and result in the narrative of the story being fractured. Eventually we get used to the change from first person to third and the switches to various points in time and finally the story becomes a satisfying, coherent whole.