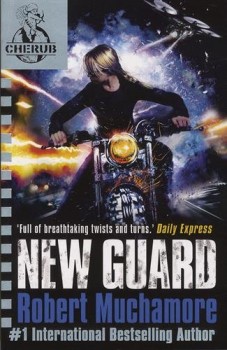 In one last highly dangerous and highly deniable operation, CHERUB mission controller James Adams has to plan and execute the rescue of two kidnapped oil industry workers from war-torn Syria.

I was sorry to learn that New Guard wraps up the long-running CHERUB series, but this book certainly brings the tales of the young agents to a stylish and hair-raising conclusion, wrapping up the stories of former agents James and Lauren Adams, as well as leaving CHERUB in good hands for the future.

The premise of this teen thriller series is simple, and don’t worry if you’ve not read one of the books before, as New Guard works perfectly as a standalone adventure. No one expects kids to be spying on them, so the youngest operatives in British Intelligence can be right under the noses of criminals and terrorists and usually no one is any the wiser. Sounds far-fetched? Actually, no, it works, it really works. The kids undergo gruelling training at the top-secret CHERUB academy, which masquerades as an army base, and the series charts their highs and lows.

In New Guard, twins Leon and Daniel Sharma are sent to a privately-run residential care centre in a rough area of Birmingham. They are there to get close to Oliver Lakshmi. The twins have a dual brief: firstly, to assess if Oliver might be a suitable recruit for CHERUB and secondly to see if he has any information on possible links with radical Islamic groups like Al Qaeda and Islamic State. Oliver is, to put it bluntly, an unpleasant little shit, and leads the twins into problems with local criminals.

The first part of the book concentrates on the younger agents, and the second half follows the CHERUB old guard of James Adams, now a mission controller; his long-standing girlfriend Kerry Chang who works in investment banking; Lauren Adams, who now drives racing cars; and their friends and former CHERUB agents Kyle Blueman and Bruce Norris. The ‘old guard’ are all reunited for a dangerous mission to rescue two kidnapped oil industry workers from war-torn Syria.

The series has never lacked explosive action, but the Syrian mission is one of the toughest tests the former agents have faced. It’s all on a wholly deniable basis, meaning that if it goes wrong, they’re on their own. There’s a real sense of danger hanging over New Guard, and absolutely no certainty that everyone will make it out. When a training accident leaves the team one person short, Ryan Sharma, very close to being too old to continue working for CHERUB, steps in, and joins the former agents on their mission.

Muchamore doesn’t pull any punches in the language used or in the descriptions of the explosive and violent action the team are engaged in. People die. Children die. Nothing is sugar-coated. It’s raw, brutal and always believable. New Guard is a fitting end to a series that has maintained a consistently high standard from start to nail-biting finish.