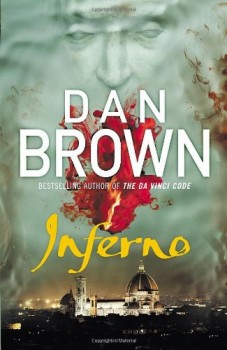 Professor Robert Langdon wakes up injured, evidently in Florence, to find himself being chased.  His attempts to remember what he was doing before this event require him to identify the violent images he keeps seeing.

Robert Langdon wakes up in a hospital bed in Florence. He is an American professor of art history, specialising in iconography and he has a fascination with Dante. When he wakes up he has amnesia and grotesque visions and so he gradually has to work out who he is and what the visions might mean. However almost immediately it appears that someone is trying to kill him and a ‘doctor’, Sienna, helps him to escape.

This is the start of a very long chase that sees the two of them trying to predict what to do next to solve the puzzle of the identity of his enemies and the reasons why they might be chasing him.

It soon becomes apparent that this book is an opportunity to air arguments and statistics related to population growth and likely future problems it might cause. The arguments and actions certainly bring the issue into focus in a very graphic manner. Reference to the philosophy of Malfus provides the narrative with a quality that encourages belief in the story. The physical context of the story also contributes to this in that it is set in real locations in Florence, Venice, and Istanbul.

Descriptions are full and graphic and indeed provide a possible itinerary for those wishing to visit the locations in the future. The use of Italian phrases and sentences is also likely to draw some readers in. Trying to translate before the meaning appears in the text is both fun and another hook for involvement.

The writing throughout the book is skilled at creating atmosphere. The contrast between the thick of the chase and the calm, gentle epilogue at the end epitomises the ability to create such different ambiences, however close together. The problem-solving is a slight disappointment in that whilst the whole story depends on the main characters being able to solve problems relating to Dante’s writing, they do this very quickly – a bit more of a struggle might have appealed to the minds of problem-solvers reading the book. Issues of control are taken to extreme in which a range of arguments are aired, partly through different points of view being represented by different characters. But there is a lack of discussion/argument within the day-to-day problem solving that has to be done by the main characters.

There is an interesting use of symbolism with an amulet or talisman that gets broken at a crucial point in the story, also some play with the idea of a new life emerging. Parts of the story are reminiscent of James Bond settings – the provost and his yacht, or the Head of the WHO and her plane for example. These nods to modernity are in stark contrast to the descriptions of Dante’s inferno and the ancient geographical settings. The juxtaposition of the new and the old ideas is done in a very clever way. Whether or not the end justifies the means is a constant theme.

Overall this is a real page-turner as might be expected from this author. It grabs the imagination and holds the concentration throughout. It is perhaps not quite in the same league as the Da Vinci Code, in that it is slightly more superficial, particularly in the problem-solving elements. Nevertheless it is a really good read – a tour de force.