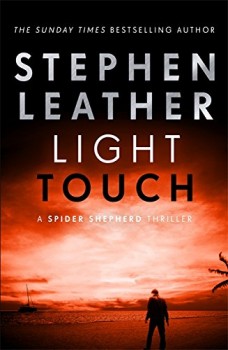 Spider Shepherd is sent undercover to report on whether another operative from a different agency, also working undercover, has gone rogue. In addition, he’s dragged into the hunt for a possible rogue SAS soldier.

‘Who watches the watchmen?’ is a popular translation of the Latin phrase ‘Quis custodiet ipsos custodes?’ It can be more literally translated as ‘Who will guard the guards themselves?’ Both translations apply to the latest outing for Dan ‘Spider’ Shepherd. He’s still working for MI6 and still having to put up with his slimy handler, the ever-unctuous Jeremy Willoughby Brown.

The antagonism between the two is barely veiled, with Willoughby Brown assiduously referring to Spider as Daniel and Spider retaliating with punctilious politeness with Willoughby Brown’s first name, a splendidly British method of insulting people you don’t like. It’s all very civilised. Except that there isn’t much about Spider Shepherd’s life that can be described as civilised, as the opening scenes show when Spider goes up against Islamic terrorists in the heart of central London. In the light of recent events it’s harder than usual to read passages like this, even though the book was clearly written well before the terrible events of London Bridge and Borough Market.

After the obligatory dramatic opening, Spider is sent undercover to watch the watcher, in this case a woman called Lisa Wilson from the National Crime Agency who is also working undercover, with a brief to report on a suspected big-time drugs smuggler. There’s a fear that she’s gone over to the dark side, so Spider is being put in to check up on where her loyalties now lie.

As ever with a Spider Shepherd thriller, there’s a parallel, loosely-linked side plot, in this case the story of Matt Standing, a sergeant in the SAS, who loses his rank after decking an officer during a heated exchange. This follows Standing’s refusal to regard a busload of schoolkids as acceptable collateral damage in the war against the so-called Islamic State in Syria. The Regiment don’t want to lose him, so he’s sent off to cool his heels in London and undergo some anger management therapy. But Standing has a hair-trigger temper, and when he goes on the hunt for the drug pushers he believes are responsible for his 16-year-old sister’s death, he isn’t very subtle about what he’s doing. But there are people who want him stopped, and that’s when things get very murky indeed.

I’ve been dubious about the relevance of some of Leather’s previous side plots, but in this instance, I was as caught up in Matt Standing’s story as I was in Spider’s. Leather draws heavily on current and recent events, which add an extra moral – or immoral – dimension to his thrillers, and in this instance, the age-old question of can the ends ever justify the means is at the heart of both stories. I didn’t end the book with an answer to that question, but I did end it knowing where my sympathies lay. This is a hard-hitting thriller that will make you question your own morality.