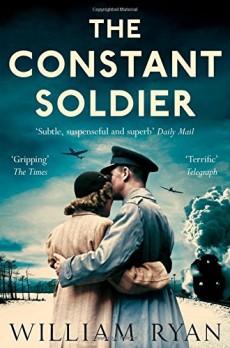 It is 1944 and Paul Brandt, a German soldier, is returning home from the Russian front, disfigured and having lost an arm. He has no idea what his future will be once he has recovered from his injuries.

It is 1944 and Paul Brandt, a German soldier, has wounds so severe that he has been given large amounts of drugs to ease the pain. During his journey from Russia his mind wanders as a result and it is clear that he has suffered psychological as well as physical injury. The one constant image his mind refuses to discard is that of the girl in the café in Vienna before the war, the one who had been arrested – something for which he blamed himself and that he would dearly love to rectify. However, in view of his injuries, he has little expectation of ever being able to do so.

He has made no plans for the future but would like to make a new start. Eventually, he decides to return to the village in Upper Silesia where he was born, mainly because he feels that he would get help there, particularly from his father and sister, Monika.

When he arrives he finds that the village has changed very significantly whilst he has been away. In particular, there is a new building over which flies the flag of the SS. It looks like a hotel, except that it is surrounded by a barbed-wire fence. It turns out that it is a rest hut for the SS guards who staff a nearby concentration camp.

Then Brandt notices one of the female prisoners from the camp, dressed in pyjamas and working on the lawn in front of the hut. She is wearing on her breast a piece of white fabric, marked with a red triangle. He has to look at her more than once before he is absolutely certain that she is the girl from the Vienna café all those years ago. He knows also that the triangle should be yellow. Suddenly he has decided what he is going to do. “I plan to make amends,” he says. “For all of my sins.”

It turns out that she is one of six women prisoners who do the cooking, the cleaning and any other jobs that the SS guards require. Everybody is aware that the Russian army is now close and – although it is admitted only on pain of death – that the Germans cannot possibly stand up to them. What Brandt fears is that the Russians will behave just as savagely towards the civilian population as did the German army in its advance. He knows, therefore, what form his making amends will take. He will ensure that he rescues the woman he knows as Judith, together with the other women prisoners, before the Russians arrive.

The remainder of the novel shows him ingratiating himself with Neumann who commands the rest centre, taking a job there and gradually beginning to understand whom he can trust. Neumann himself is a strange mixture of the brutal and the sensitive. He realises that he has a duty as an SS officer, but at the same time he feels isolated and is never able to convince himself that what he is doing is right. The plight of the prisoners under the bullying and unpredictable Peichl is well described and Brandt realises that he is an obstacle to his plans. He sees also that little help is to be expected from the mayor, Weber, concerned as he is with organising the army of old men and boys to confront the Russians, though it is noticeable that, as they get closer, he is less ready to don his Volkssturm uniform.

The tension rises towards the end of the book as the Russian army gets closer. This is reflected in the short chapters and the movement from one scene to another. There are short scenes showing a Russian tank battalion, though these do not add a great deal to the narrative. We are never entirely sure what Brandt’s plan is, and we have to wait until the very last pages to find out whether it succeeds. It is a story showing the worst aspects of human nature as well as the capacity for love and, perhaps, happiness.