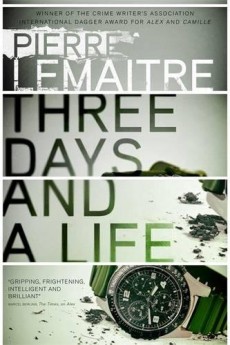 Three Days and a Life

Antoine Courtin is 12 years old and lives alone with his divorced mother. Something of a loner, he has developed a deep love for the neighbours’ dog and when it is hit by a car and has to be put down he is devastated.

Antoine Courtin is 12 and doesn’t have much in common with most of the children in his age group and as a result spends a lot of time in the forest on the hills of Saint-Eustache. He had been mainly responsible for the concept and design of a fort which the children had built there, but Theo, the son of Beauval’s mayor, had claimed that it was his initiative and Antoine, pleased to have brought it about, wasn’t interested in getting the credit for it. Instead, he decides to build a tree house all by himself. He has two faithful companions in his trips to the forest – Ulysses, a dog owned by Monsieur Desmedt, the Courtins’ neighbour, and six-year-old Remi Desmedt, who worships Antoine and follows him wherever he goes.

Antoine adores the dog and is totally devastated when one day it is struck by a car and has to be put down. Unable even to talk to anybody, he escapes to the tree house, but once there, decides to destroy it, scatters the debris and sits with his back to a tree, sobbing bitterly. It is then that occurs the incident, the memory of which is to dominate the rest of his life.

The remainder of part one of the book is pure suspense. It is a profound psychological study of a child’s tortured imaginings. Almost anything can instantly bring back the memory of what happened in the woods. The reader cannot help but sympathise with the little boy and is glad when events occur a few days later that seem to promise his secret will be kept.

The novel moves forward 12 years and we find Antoine, having completed his medical studies, about to take up humanitarian work, accompanied by Laura – a girl he loves deeply. His plans have to be changed, however, when he has a visitor from Beauval - a girl on whom he had had a crush when he was 12 years old. She presents him with an age-old problem, one which becomes insoluble when it turns out that there are plans to develop the wooded area at Saint-Eustache. He is all too aware that this will almost certainly reveal the secret he has so carefully guarded.

The decision he makes is one that will change his life for the worst in so many ways. Instead of taking up the humanitarian work that he had planned, he finds himself instead doing very routine general practice in the last place in the world he would want to be. The mistake he made in the woods all those years ago was not a small one, but in essence he was an innocent child when he made it. He didn’t have the experience to understand that he would never be able to put behind him the memory of what he did at that time and spends a lifetime dealing with the tragic consequences.