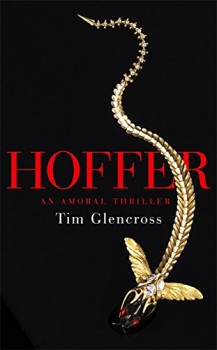 Suave William Hoffer is a fixer for the super-rich. When a girl is found murdered in his flat, his past seems to be catching up with him – and he must revive old instincts to survive.

I can’t say I like William Hoffer. He’s handsome, refined, an established figure in London society, always seen in the right places with the very rightest of people. If I met him socially I would find him arrogant – a name-dropping snob, eager to parade his learning and to stress how at home he is with the most fashionable. It’s a good job Tim Glencross’ story is relatively short, because I found it increasingly hard to even begin to care what happened to him.

Glencross’ first novel, The Barbarians, was a satire on the Islington set. This is in a different league altogether – the London super-elite of Russian and Arab billionaires, titled or monied Brits, the world of self-centred monsters where not to be ‘seen’ is not to exist.

The so suave Hoffer, a nebulous figure, floats on the surface of this glittering pond. Hardly rich himself, he is a ‘consultant’, a title which covers a multitude of sins, really a fixer, who knows a lot of very shady people and helps negotiate deals, locate desirable art and so on.
He is deliberately vague about his past and present, particularly his souring relationship with a typecast Russian billionaire of dubious probity and background.

When a ghost from his past in Mexico re-surfaces, and a girl is found murdered in his flat, Hoffer is forced to revive self-preservation instincts honed in his time negotiating with Columbian and Mexican drug cartels, security services and the American DEA.

There’s plenty of humour and style in this contemporary commentary on the world of the super-rich. For all its modern trappings, this frankly amoral story is reassuringly old-fashioned, with a dry wit and sense of the absurd. Hoffer navigates his way through the maze of deceptions and unexpected revelations this morally dubious world throws at him almost with the insouciance of an evil Wooster – and plenty of the other characters would hardly be out of place in a Drones Club set  a long way the wrong side of the tracks!

This is a novel that sets out to entertain from the opening page, with vivid, larger than life characters. And it’s well done. Hoffer’s world-weary and cynical tone is largely convincing and sometimes very amusing, leavened by some real social observation, a building sense of tension and occasional violent action. In an aside on America’s drugs for guns deals with its southern neighbours to halt Communist advances, his comment that ‘soon enough the problem wasn’t ragtag Leninists running around Central America, but the narco monsters the United States had helped create’, is not only clever, but also wickedly accurate.

The slightly mannered style, no matter how brilliant or witty, detracts somewhat from both  the impact of the killings, which occur at regular intervals, and the passages revealing how much Hoffer was, and is, living on the very edge. As for the conclusion, it’s unconvincing. Ambiguous, inconclusive endings are fine, usually setting up the reader for the next in a series. In Hoffer’s case, I hope not!