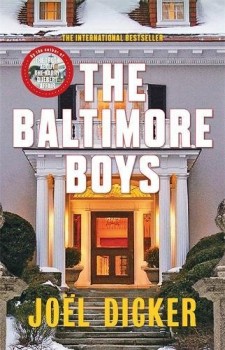 Three brilliant young men from different branches of a Jewish family all have dazzling futures until their close world collapses amid lies, jealousy and betrayal.

Joël Dicker’s debut The Truth About The Harry Quebert Affair was an international best seller, scooping awards and selling more than 3.5 million copies. Now writer Marcus Goldman is back, but this is a very different type of story. A sort of prequel and sequel to his debut, it does not go into any great detail about its predecessor and is a perfectly satisfactory standalone. Although it covers much of the same ground about how Marcus became a writer and how he crafts his books, there is something much darker about this titanic family saga which covers almost half a century.

If you’re looking for action, that’s not Dicker’s style. It is an at times emotional coming-of-age story of cousins from different branches of a Baltimore Jewish family and their unofficially adopted ‘brother’. It is a tale of three brilliant young men, all with apparently dazzling futures, before their very American dreams of success and lifelong brotherhood collapse in a welter of lies, jealousy and betrayal. It is also a captivating and beautifully conceived, nostalgic and regretful, very Jewish, tale of generational sibling rivalry and family disputes, full of striking insights into the extreme and baffling world of the American class system.

Marcus, the narrator, struggles with the burdens of his past, as he attempt to tell the astonishing story of the Baltimore Boys, cousins from very different backgrounds, one privileged and wealthy and the other not, plus Woody, the abandoned street boy who becomes the third member of an inseparable trio.

Hillel, son of a successful lawyer and a respected doctor, is physically small, aggressively intelligent with an interest in subjects far beyond his years. Woody – ‘handsome, muscular, brooding and mysterious – from a broken home but taken in by Hillel’s parents as their own, is a brilliant athlete, though he can be surprisingly sensitive. Marcus, his father an engineer and mother a store sales rep, would give anything to live with Hillel and Woody, who he identifies with success and happiness. He is embarrassed by his own upbringing, craves their lifestyle and is always ashamed to go home after a weekend in Baltimore.

Dicker nurtures this slow-burning, detailed, suspense story, developing his characters so strongly the reader will actually feel they know them personally. They are complex but cleverly created, with their loves, loss, family and friendships, loyalty, secrets, jealousy and rivalry always the centre of the storyline.

This moving tale, beautifully written and with some wonderful descriptive passages, flows well from past to present. Even Marcus’ meeting with his former love – the teenage dream of all three boys and now an internationally successful singer – hardly seems contrived. Some readers may not have the patience to stick what is a long and complicated tale. Dicker’s style, that of all great storytellers, is to spin out his tale, and he spends much of this fascinating novel skirting around what actually becomes of The Baltimore Boys until the last few pages. Stay with it. You will not want to miss the ending.

A small personal complaint was that Marcus in his role as narrator, and his old flame Alexandra, were a little unconvincing. Their dialogue lacked the passion, warmth or real anger of old lovers given a second chance at happiness.

This magnificent story, translated from French by Alison Anderson, is split into five sections which are titled for the traditional Jewish-American pre-occupations of Lost Youth, Lost Brotherhood, Family, Tragedy and Atonement. And it marks Dicker as the best thing to come out of Switzerland since Roger Federer and Toblerone!