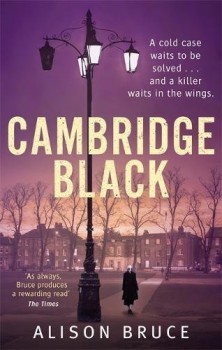 A young woman sets out to prove her father’s innocence of an arson blaze in which two people died and her inquiries lead DC Gary Goodhew to two more connected crimes, including the death of his own grandfather.

It’s looking suspiciously like Alison Bruce – who boasts previous careers in IT management, admin, electro-plating and DJing – has decided to move on from her appealing, wayward and intuitive Cambridge DC Gary Goodhew.

This seventh tale is as sophisticated, intelligent, well-written and entertaining as any that have gone before. But it has an awful air of finality. Several of what have been ongoing storylines are brought to a conclusion at the same time as a successful current crime investigation.

Gary finally succeeds in his quest to find out who murdered his grandfather. His boss DI Marks goes into retirement knowing a major outstanding crime has been solved. Sue Gully, the TDC who many readers would have hoped would become Gary’s love interest, transfers to the Met. This lays the foundation for three inter-connected cases that Goodhew will investigate.

This convoluted and intricate story reaches into the past with layer upon layer of lies, deceit and treachery. At its heart is a story about relationships between parents and their children in some deeply flawed families.

Bar the detectives – with the exception of the ambitious, but none-too-bright DS Michael Kincaide and his near-pathological hatred of everything Gary represents – most of the civilian characters are so unpleasant it is quite difficult to summon much enthusiasm for their problems or become overly invested in their outcomes.

An arson attack in 1991 starts a trail which reverberates for more than the next two decades. Amy was seven when her father was arrested for the murder of two people in the attack. His conviction scarred her childhood and cast a shadow over her life until, 22 years later, new evidence suggests he was innocent. Amy sets out to clear his name, and unwittingly lays the foundation for Goodhew to probe three inter-connected cases – with her own life at risk.

The story works perfectly well as a standalone with a well-crafted plot slowly making the connections between three seemingly disparate events and relationships which will keep you guessing right to the end. But that ending is so frenetically paced, that I was left thinking that the tying up of so many loose ends is just too quick and not entirely secure.

Cambridge forms an integral part of the story. If this is to be the end for Goodhew, Bruce has taken him out on a high, with the menace and insidious evil of the story ratcheted up right to the final scenes.