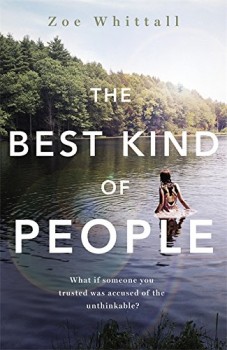 The Best Kind of People

George Woodbury is a respected and much-loved teacher who saved his school from the attack of a gunman. He is a pillar of the small community of Avalon until the day he is arrested and accused of inappropriate sexual behaviour with several of his students.

In the school where he works, George Woodbury is well beloved, receiving the award for best teacher every year, an accolade magnified by his having saved the school from the attack of a gun-carrying intruder ten years earlier. George’s family is wealthy and lives in an extremely prestigious lakeside house in the wealthiest part of town.

Joan is George’s devoted wife, a respected and successful nurse, wife and mother. Andrew is George’s son, a successful New York lawyer, who suffered during his adolescence because of the attitude of his peers to his homosexuality. Sadie is George’s 17-year-old daughter, exceptionally able and academic and starting to explore her sexuality.

All appears to be going very well until the day that George is arrested for alleged sexual misconduct with four minors and the attempted rape of a minor. He is taken to prison and refused bail.

This book is exceptionally well-written. The story is told from the viewpoint of wife, son and daughter with an associated cast of local people, boyfriends and colleagues. The evolving attitudes and confusions of the main protagonists are explores with clarity and feeling with the result that the reader is able to empathise with all of the differing viewpoints. The impact of the accusation and the ensuing investigations and community actions is frighteningly real.

A really clever strategy used by the author Is to never explore the story from the viewpoint of George himself. There is no indication of his guilt, innocence or involvement. The reader is forced to build their own impression from the knowledge of those around him, amplifying the reality of the situation.

Characterisation, mood and place are portrayed with great skill. The concept behind the novel, the damaging effect of accusations of sexual misbehaviour, the attitudes of differing factions in society and the devastating impact of such accusations on the family, is demonstrated with brutal frankness and yet also with great sensitivity. This is a thought-provoking and engaging novel.