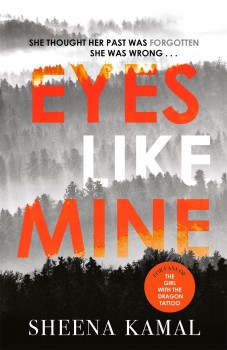 A girl is missing. And it’s Nora Watts’ daughter – the one she gave up at birth.

It’s five in the morning in Vancouver when Nora Watts gets a phone call from Everett Walsh, a man she has never heard of. His daughter has disappeared. He needs Nora’s help. Within hours, Nora’s already fragile life comes crashing down; the girl missing is Bonnie, her daughter – the one she gave up at birth.

Everett’s wife Lynn seems to be shoving the blame in Nora’s lap. They’d discovered Bonnie had been looking for her birth mother. Everett thinks she may be looking for her birth father. Nora knows Bonnie’s father’s name was not on the birth certificate as Bonnie was the product of rape. What Nora can’t work out, between the lies and the ugly vibes, is how Everett knows she looks for missing people for a living.

Bonnie is one person Nora never expected to have to look for. One she is not sure she is ready to look for – and one who is going to rake up her past in the most devastating way.
I understand that there is no such thing as a unique plot. It is the writer’s voice and distinctive characters that help avoid that sensation of déjà vu. I liked the confidence of Kamal’s voice, written in the first-person present tense for most of the book. Unfortunately, her protagonist utterly disappointed me.

The odious main character bandwagon has clearly rolled through Canada, acquiring yet another passenger. Whilst sugar-sweet protagonists make most readers curl their noses, me included, this fashion for obnoxious leading roles with no redeeming features is starting to look stale and hackneyed.

Nora is unfeminine, ugly, unhygienic, anti-social, aggressive, rude, a people-user and an alcoholic. The reader knows this because these traits are rammed down our throats at every available opportunity. She is the person most would cross the street to avoid, even though she sort of loves her dog and sings well. Yes, she has had a hard life. Yes, she was raped and left for dead. Yes, Nora has PTSD. Unfortunately, her self-pity, attitude and behaviour stifle any empathy. Protagonists are supposed to evolve. Nora Watts started off unpleasant and regressed. By the end of the book, I was skipping paragraphs because I couldn’t stomach her any longer. This may be the first part in a trilogy, but the author risks alienating her audience to the point they won’t bother to pick up the second book.

The plot is convoluted and muddied by indistinct and stereotyped characters. The ‘crime’ is more suspicious than the suspects: not impossible, but barely plausible, and so wrapped up in red-herring motives, it is at times difficult to see where the plot is going. This made the conclusion and reveal anti-climactic. Nora’s actions and the number of conveniences providing her with ‘lucky moments’ had my suspension of disbelief in tatters. Particularly when her singing attracted an unlikely saviour.

That said, for readers who like to get inside the heads of PTSD sufferers but don’t mind repellent characters, Eyes Like Mine is fulfilling and has an air of experience. If Kamal had given Nora one or two redeeming features, her writing would have captivated me with its attention to detail.

The sense of place and the atmosphere Kamal generates through her description is convincing and satisfying. I ended the book with a sharp image of the dark side of Canada and a feel for its nature.