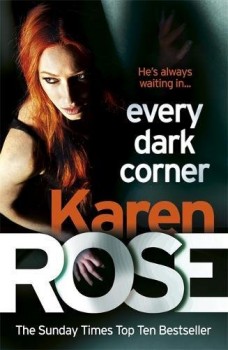 There is a predator in Cincinnati, hunting teenage children for the internet sex trade. FBI special agents Kate Coppola and Decker Davenport are on the trail.

Eighteen-year-old Mallory is out shopping for the man she hates, when the latest sleaze-bag tries it on. But even though a lady-cop comes to the rescue, she cannot speak up. She cannot tell the truth about Sunshine Suzie.

FBI special agent Kate Coppola’s plane had hardly landed in Cincinnati before she was thrown in to her first assignment; the annihilation of a trafficking ring, in which Special Agent Griffin (Decker) Davenport had been working undercover for three years. Now, a week later, she is still by Davenport’s hospital bedside, where he has been in an enforced coma since he took a bullet in the lung. She is ready to keep him calm when his eyes finally flicker open. She is not ready to hear that one of the traffickers’ unidentified customers is gathering teenagers for the internet sex trade.

Kate and Decker have to find the man but he covers his tracks by taking out any suspects, as well  as potential witnesses. Nowhere seems beyond the predator’s reach; the streets, the police department, the hospital and even the prison. He has infiltrated them all, and they are now his killing fields.

I once heard a film critic say that a good film wraps up its story in well under two hours. Films that take longer are full of padding and waffle. While I will say that I have seen some excellent long films, overall, he had a point. It is the same for books; lengthy books tend to mean a waffle-fest, or the story is too complicated. So, when I picked up this book, with over 600 pages, the alarm bells clanged loud and clear. I was worried about whether there would be padding and whether the bppk would be unnecessarily complicated. Sadly, Every Dark Corner, the third book in the Cincinnati series, did little to dispel my belief that brief is beautiful.

Written in the third person, each scene follows one of the several principal characters in turn: Mallory, Decker, Kate, the criminal, amongst others. This tactic normally helps to drive a story forward. Unfortunately, until halfway through the book, I felt the point of view change fell flat and slowed the pace, thanks to a ridiculous number of characters to get to know, all with generic voices, half of them related, and many with similar names. At one point, early on, I was introduced to six characters on one page, a couple of whom I hardly came across again.

Although this story, unfortunately, gave me no sense of place, remind me never to visit Cincinnati for a fun holiday. If the characters in this book are indicative of the general population, therapy must be the number one industry and abuse the number one pastime. Almost every person in this story had been abused, traumatised or exposed to drugs at some point in his or her life. And boy, did we get all the details on each of them. However, the one person who Rose could have gone to town on and given him a reason for being so ghastly, was the one person whose backstory was hardly touched, and who seemed to have not really suffered – the criminal. Whilst I am certain some crime-fighters have baggage, the sheer number of scarred people made this far-fetched, and in places, corny. It detracted from the horror of a story about child pornography.

Although I love romantic suspense, this story stumbles from thriller to romance to wannabe erotica, leaving the characters stereotyped and unbelievable. Whilst I am certain men do think about sex often, and not always at the most appropriate moment, the male sex-introspections were almost comical, and certainly not credible.

A sniper who knits and does origami in public? How quaint. Unfortunately, I kept giggling at Kate’s unlikely behaviour as it gave me visions of a sexed-up, souped-up Miss Marple. In real life, her colleagues would have told her to stop making that awful clacking noise with her needles and booked her an appointment with a psychiatrist, not encouraged her OCD.

I am sure if I had read the first two books in this series, I would have found the large cast less complicated. However, it does come across as a standalone story, which could have been improved with a bit of character-culling.  Being late to the series, I am undecided who is the hero. Is it Decker or Kate, even though she has only just arrived in Cincinnati for the third book?

That said, the technical aspects are well researched, some of the characters are likeable, and the ending is reasonable. For readers who crave dark and gritty, Every Dark Corner has it in shovelfuls.