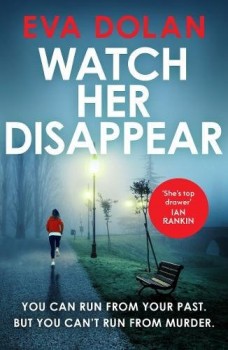 DI Zigic and DS Ferreira of the Peterborough Hate Crimes unit are on the hunt for the killer of a transgender woman.

When the body of a transgender woman is found by a dog-walker, the Peterborough Hate Crimes unit, aka DI Dushan Zigic and DS Mel Ferreira, find themselves in a turf war with colleagues over who gets responsibility for the murder investigation – but winning the prize turns out to be something of a poisoned chalice. To complicate matters further, there’s a serial rapist at work in the area, and Ferreira believes there’s a possible connection with the killing of trans woman Corinne – formerly Colin – Sawyer.

As ever, the spotlight turns on the victim’s family, and a complicated web of relationships emerge. Corinne’s ex-wife is now living with her former best friend. Her daughter is supportive of her transition, but her son is not, and he has a record for violence. Corinne’s new partner, also a woman, is another complicating factor.

This was my first meeting with Zigic and Ferreira and I very much enjoyed the complicated web Eva Dolan weaves around her characters. The problems and pressures faced by the transgender community are handled sensitively but with no punches pulled. Corinne Sawyer is no saint, and there’s no attempt to portray her as such, but that doesn’t in any way lessen the impact of her death.

I was slightly hampered at times by my lack of knowledge of the main characters and their backstory, but I pretty quickly learned enough about them to feel at home. Zigic (of Serbian extraction) is a somewhat harassed family man, juggling the demands of family and job and feeling pretty knackered most of the time. Ferreira (Portuguese parents) is feisty and somewhat gobby. She’s sleeping with another copper, DI Adams from the murder squad, but they seem to have kept the knowledge of their relationship from the rest of their colleagues.

The pressure on Zigic and Ferreira mounts, as a vocal activist for trans rights turns her attention to the investigation, and the unit’s handling of the investigation comes under close scrutiny, especially after Ferreira pursues her own enquiries into the possible links with the rape cases. Tensions mount and the search for Corinne’s killer reaches a powerful conclusion. Watch Her Disappear is a quality police procedural pursuing an unusual angle. I liked both the characters and the complex, satisfying plot.