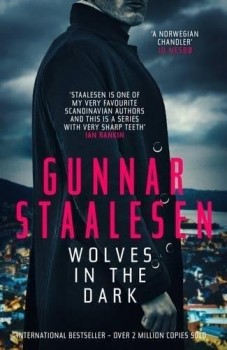 Wolves in the Dark

Bergen’s most famous private investigator Varg Veum is accused of being part of a paedophile ring and thrown into jail. Desperate to clear his name, he must unravel his own hazy memories of failed jobs and uncomfortable assignments.

Following the death four years ago of his great love Karin, Varg Veum’s life has turned into a hell of self-destruction, fuelled by alcohol, grief, lust and complete blackouts. His firm barely makes any money and he seems unaware of what’s happening around him. Yet there is a tiny glimpse of hope as he also attempts to stay sober for the sake of his new girlfriend Sølvi (who appeared in the previous book Where Roses Never Die) and her young daughter Helene.

So when a dull grey September day begins like all others, Veum expects that Jakob E Hamre of the Hordaland Police District will treat him as an annoying and dogged quasi policeman as usual. Instead Hamre talks about dubious content on his computer, and more specifically traces of child pornography.

Bergen’s most famous PI initially has no idea how serious the accusations are and that he will soon become one of the main suspects incriminated in a dangerous paedophile ring. Veum is thrown into a prison cell and struggles to remember any cases that he has worked on in recent years which could have resulted in someone planting the repulsive evidence. Since this is the only possible explanation of what had happened, this thought keeps him alive, although paralysed by panic and fear.

His lawyer Vidar Waagenes employs the services of an awkward computer genius Sigurd Svendsbo, and urges him to go through any snippets of memory not just to clear his name, but also to bring some explanation about deceit. Veum slowly starts recollecting an investigation into a man called Sturle Heimark and a trip to the small town of Fusa where a supposed suicide could have been a murder.

There was also a job for Nicolai Clausen demanding hard proof that his wife Åsne had had an affair, and a visit from a nameless man who wanted to extricate himself from an ‘exclusive’ club which was all about blackmail and prostitution. Veum is unable to link the odd stories, and escaping from custody doesn’t improve his chances but allows him some breathing space, hiding in someone else’s flat and tracking his own memories to names, places and people, as his emotional turmoil meets a shocking finale and a painful but realistic resolution.

I’ve been a fan of the social worker turned private detective Varg Veum for years. It takes a self-assured true master to create such a credible character who evokes conflicting emotions and becomes ethically compromised yet tugs at heart strings. The battered anti-hero, doubting his own judgement and terrified that his moral compass has gone entirely haywire, struggles with the hardest and most personal case yet in Gunnar Staalesen’s 21st book.

In Wolves in the Dark, well translated by Don Bartlett, the gritty no-nonsense style stops extreme emotions from exploding. Staalesen’s storytelling is at its finest, as always firmly underpinned by astute observations of changing society, and the context in which the morally incomprehensible actions take place, whether they relate to the father’s abuse of his own child, or selling sex and objectifying women.

The individual failed jobs and assignments that Veum analyses appear random and confusing. But there’s a method in the madness of his hazy mind. Staalesen knows how to keep weaving the most intricate web of connections set in Bergen’s criminal underworld, while taking on a disturbing subject of child abuse provides an opportunity for a wake-up call for his complex and unforgettable character.