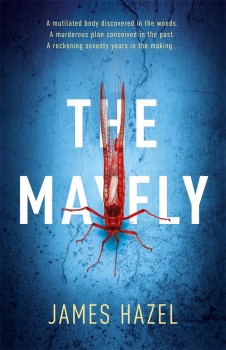 Lawyer Charlie Priest is approached by tycoon Ellinder to investigate the death of his son Miles, shortly after Charlie escapes an attack from Miles himself.

This is the first of a promised series starring London-based ex-DI lawyer Charlie Priest and his team: Okoro, Georgie and Solly. Okoro and Solly play only minor roles in this episode, but young Oxford-trained Georgie plays an active part. The four all have significant strengths and weaknesses, Priest’s Achilles heel being dissociative disorder which on occasion threatens his hold on reality.

Priest’s introduction to the mayfly is an assault in his own home by a young man searching for a flash drive. At his office the next day, pharmaceutical magnate Kenneth Ellinder calls to request that Priest investigate the death of his son Miles. It turns out it was Miles who visited Priest the previous day, and was subsequently found impaled. Priest knows nothing of the death, or the flash drive, but despite misgivings takes the case. Ellinder’s daughter Jessica provides an additional inducement.

The case heats up when Sir Philip Wren, the Attorney General, is found hanged in his own home, and his daughter Hayley goes missing. Priest receives a note from Wren saying that he has sent Priest a package. Although the details are still obscure, there are indications that all these events are related in some way.

Some clues as to the link are given by interruptions to the contemporary action by occasional chapters set in the aftermath of World War II, and the interrogation by elements of British Intelligence of Schneider, once a doctor at Buchenwald. Schneider was working on a modification of strychnine to produce a drug which would cause excruciating pain without killing.

All the ingredients for a dramatic struggle are in place: a murky but very nasty foe, abductions of innocents and the threat of horrible torture, and a protagonist striving against numerous difficulties to solve the mystery. Priest has a troubled brother, William, incarcerated in an institution after multiple murders, and shares some of the same mental traits. Their competitive analytical speculations are worthy of Sherlock Holmes.

I have quibbles about a few minor points. I would defy anyone to retrieve a lighter from their shirt pocket with their teeth. It would be impractical for the bad guys to wear bags over their heads, for several reasons. And that the police could obtain a warrant for search of a solicitor’s office on the basis that he had a suspect client and that his business card was found in the pocket of a victim strikes me as unlikely.

Nonetheless, I like the main character, and his style and team are unusual enough to provide plenty of interest. Priest’s peculiarities, and his ex-wife Dee Auckland, now an assistant commissioner, provide impediments, but he has the qualities to surmount them. Despite the grisly tortures which threaten the principals, there is also a touch of humour about the book which prevents it ever getting too heavy.